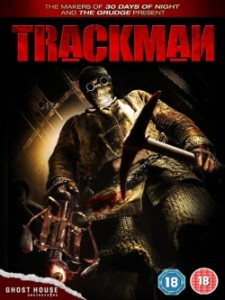 There was a certain man in Russia (not) long ago, he was big and strong in his arms a massive pick-axe.

I like Euro-horror, it’s normally really engaging and the subtitles make me feel cultured. Something about the 77-minute runtime of Trackman left me in doubt that it’d be worthwhile though.

Turns out I was right. Not that there’s anything definitively wrong with Trackman, it’s just a bit of a chore to sit through, even at that film-lite duration.

A quartet of guys successfully carry out a bank heist, only for some cops to intervene at the last moment, causing them to scarper and take three hostages with them. Into the old subterranean tunnels beneath Moscow (?) they go to meet up with the fifth member of the group and escape.

Unfortunately for them, the legend of a Chernobyl-affected freak prowling around down there turns out to be true and he likes to collect eyeballs in jars. 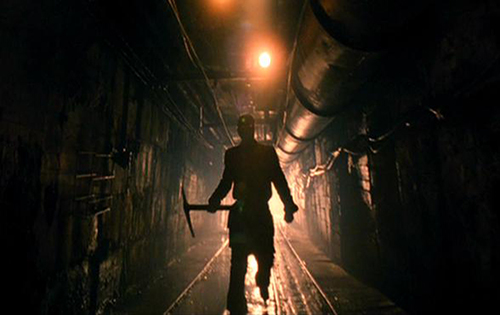 So far, so familiar. The underground setting robs the film of any pretty scenery that contemporary Euro-horror likes to boast and the killer has a habit of turning up and then not doing anything. He seems able to teleport from right behind a lost victim to out of sight, only to return later for the kill.

Strangely, the killer spares one female character, giving her back a lost earring. Sucks to be her though as she gets ‘accidentally’ shot later. I don’t like ‘accidental’ deaths in slasher films (unless they’re part of the event that prompts the loon), they get in the way and tend to happen to people we want to see die legitimately at the killer’s hands. Olga, however, was fine. She was painted as the likely heroine until shrieky Katya steps in to take over.

This is one chick who succumbs to Stockholm Syndrome within hours, seemingly falling in love with the last remaining bad guy. Both go back to save the other at various points despite he threatening to shoot her on several occasions previously!

By the end, there’s been too little grue, next to no tension and a ‘revelation’ that isn’t properly explained; a few good visuals fail to elevate this export above Creep, Stag Night, My Bloody Valentine and the numerous other films it heavily borrows from. I say nicht.

tagged with Euro-horror, get your own ideas!, slasher