Rave to the grave 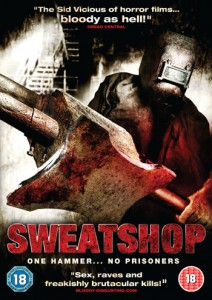 “One hammer. No prisoners.”

Dire-logue: “It’s always the quiet ones that cut your dick off when you’re not looking.”

Here’s a film that was due a one way ticket to one-starsville until it pulled a decent finale out of its grimy, dirty back pocket. A rarity for a film to start off crap and get better – usually it’s the other way around.

Young-ish ravers arrive at a dirty old warehouse to fix it up for an illegal rave party. The organiser, Charlie, is a hard-ass, there’s punk-haired spunk-o-phobic Scotty, several of his on-off girlfriends, ‘cool’ DJ Enyx, lollipop-sucking lesbian, uh, Lolli, Scotty’s fat, repulsive brother Wade and a few other less memorable ones.

Their pals who left ahead of them to set up have disappeared and after what seems like an eternity of ‘fuck you’-heavy dialogue, drug use, alcohol use and conversations no deeper than your average Justin Bieber fan’s brain matter, they start dying. Gruesomely.

Sweatshop is a weird film. Several things occur which make no sense. The title itself is as redundant as an ex-Apprentice candidate: it’s a warehouse. That’s it. Call it Warehouse. Add to this a trio or more of bizarre zombie-esque girls who torment the newcomers, all tombstone teeth and scraggly hair like they wandered off the set of the latest Ring sequel. 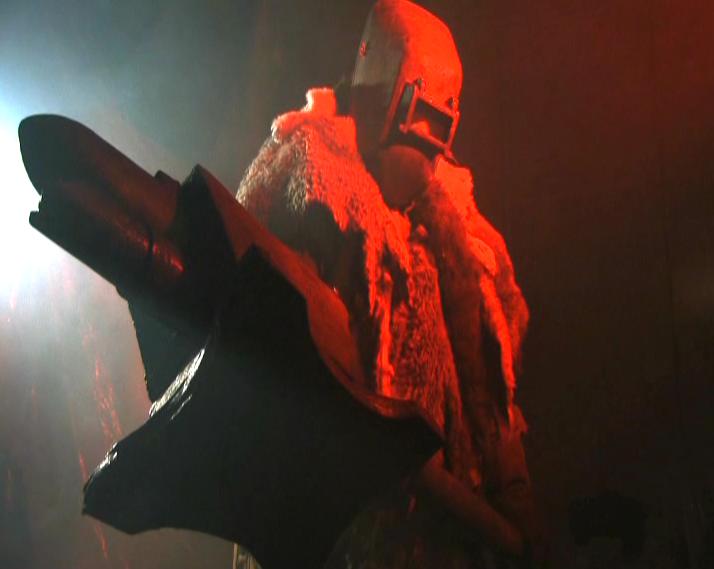 The killer is a Jason-like hulk who favours a giant war-hammer thing that reminded me of a Buffy weapon she nicked off a troll. It’s a giant steel thing that nobody but your average malformed giant killer could ever hope to lift.

With this implement, he smashes and obliterates the young-ish cast one by one. A girl’s jaw is ripped off, another has her fingers snipped off before getting the hammer to her lower half, a third is smashed through a mesh fence… Most of the preliminary violence is against the girls.

However, before you wail “misogyny ahoy!” and light your torches, the most despicable male characters are held captive and forced to choke on severed cocks, which is supposed to be some funny irony for the guy who won’t reciprocate certain favours to female company.

Charlie is the last one standing and although she’s a nasty pimp we don’t even like, we don’t care what happens to her. Live, die, whatever. 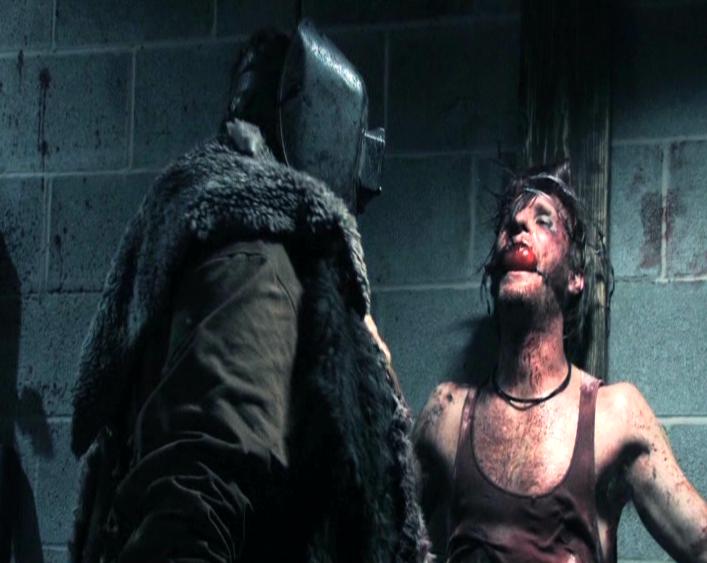 Her survival for the moment leads to the film’s best scene at the end, where she is chased by the killer into the rave (somehow in progress despite the DJ being murdered earlier on) and he goes ape on the drug-addled attendees.

It’s essentially a rip-off of the corn-field massacre from Freddy vs Jason but provides some pretty good moments: glowstick in the eye, handwalker split down the middle (another lift from a Friday), and numerous head-squishings.

There’s a nice moment where a blood-stained disco ball rolls across the floor of an empty chamber and one of the actors is known as Fernando Phagabeefy!!! It’s immature to smirk at someones name but, c’mon, Phagabeefy!?

So it ends better than it starts out, which ever way to cut it, I can’t picture myself ever being drawn to watching Sweatshop again. But if you’re a gorehound who likes to hate characters rather than root for them, this could be right up your back street. (Not a euphemism, I was referring to the area in which one might find such a sweatshop warehouse).

tagged with asshole characters, get your own ideas!, gore o'clock, I love Jason, Nu-di-ty, slasher