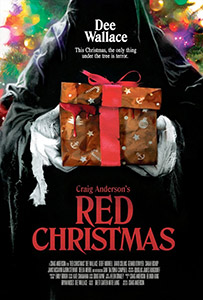 “This Christmas, the only thing under the tree is terror.”

Laughter Lines: “Why can’t we just open our presents like normal people and forget all this Oprah bullshit?”

Here’s a weird Australian flick, which sees American-in-Oz Dee Wallace hoping for the best family Christmas before she sells up her remote house to explore Europe. Heavily-pregnant daughter Ginny keeps rowing with pious sister Suzy, whose priest-husband Peter struggles with the laid back clan’s use of language. And pot. Younger sister Hope just wants to get away, and Jerry, with Downs Syndrome, tries to unify everyone with the seasonal spirit.

Things take a turn for the weird when a cloaked and bandaged stranger calling himself Cletus arrives. Dee invites him in for a warm drink and he asks to read a letter, which takes her back to a bombing at an abortion clinic twenty years prior (never nineteen, never twenty-one). Could Cletus be her unsuccessfully aborted son? Cletus the Foetus. Ho ho ho. 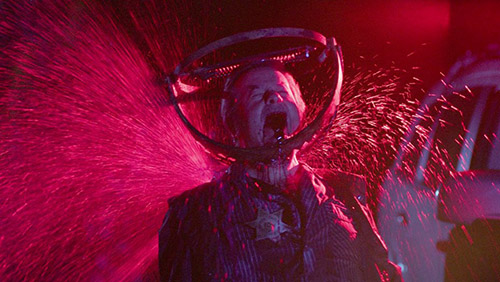 When the family eject him from the house, he retaliates with Biblical fury: Axing, skewering, grinding, and bear-trapping everybody in a siege, until the inevitable showdown with dear old Mom is enabled and also Ginny going into labour.

The Australians, like the Brits, have a pretty dark sense of humour with heavy subject matter, and it’s at times difficult to gauge what’s intended to be funny and what isn’t. Where does this film lie politically? We have the hyper-religious family members who are unable to conceive (“God is the only treatment we require”) versus the unserious pot-smoking mom-to-be. That neither are pleasant and both meet sticky ends assumes a centrist just-stop-being-dicks outlook, which I can appreciate.

Cletus’s amusing politeness and some funny demises are interesting but I just couldn’t get my head around most of Red Christmas, although Dee Wallace gives it her all, which should be commended. She must rank as the genre’s first Final Grandma.