Thou shalt repent thy clichés! 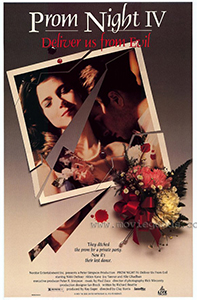 “They skipped the prom for a private party. Now it’s the last dance.”

If you’re alright with the entirely predictable then you could do worse than Prom Night IV, the slasher film equivalent of an episode of Murder, She Wrote.

The production team have ditched Mary Lou Maloney and gone back to basics with the only connection to the other films being Hamilton High where, in 1957 – arguably one of the more sucky years for the faculty – two rubbernecking prom attendees are slashed and immolated by psychotic priest Father Jonas, who wants to ‘deliver the souls of sluts and whores’ to God.

After 33 years hidden away by priests in a medically induced coma state, a do-gooder young priest charged with guarding him (Brock Simpson, who played a different role in all four movies) makes the bad decision of not dosing him and is murdered in payment when Jonas awakes, seemingly not to have aged a day in 33 years! 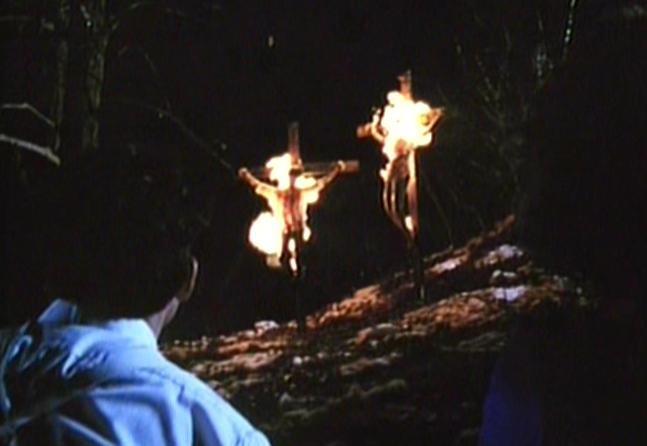 Meanwhile, a couple of Catholic school girls and their HH-alumnus boyfriends take a limo out to the country house of one of them where they plan to have their own little prom. But of course Jonas has found his way to the same locus and, feeling they’ve transgressed various Biblical blurb, proceeds to kill them one by one by one…

There are elements of Hell Night at play, little in the way of claret and the characters aren’t especially interesting. It’s plainly obvious that goody-two-shoes Meagan (de Boer) will be the last one standing but there are some decent riffs thrown into the mix; the police actually call back but Jonas picks up another extension and tells them it’s “in God’s hands.”

There’s also an amusing scene early on where template bad girl Laura is hauled into the Mother Superior’s office after being caught having it away with her boyfriend in his car. While the nun struggles to articulate a summary of the charges, Laura just looks up with a grin and says: “We were FUCKING.” Funniest moment in a po-faced film.

Prom Night IV is decent, forgettable fare – but still better than the 2008 remake of the original.

tagged with Canuck, get your own ideas!, Nu-di-ty, sequel city, slasher