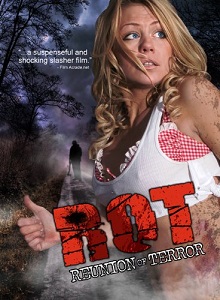 “Traditions were made to be broken.”

Laughter Lines: “I don’t know about you, but I’m harder than Chinese arithmetic.”

The IMDb blurb for this tells us: “a secret is uncovered which reveals one of the most controversial and brutal twist endings in cinematic history.”

In order to investigate this thoroughly, unavoidable SPOILERS must follow.

Six high school friends reunite some years after school at a cabin in the woods, rented by one of them, who is nowhere to be found. Previously, a couple of lesbians were murdered while camping in the same woods.

The game warden keeps turning up, there’s no food, and the hitchhiker one of the party brings along doesn’t get on with the other girls. Then people start disappearing.

The assailant gathers most of them and kills them together, meaning little killing happens for most of the running time.

And that controversial, brutal twist? The killer is punishing the others because they gave his girlfriend a ride home years ago and afterwards she was raped, contracted HIV, and died. Yeah, totally their fault. This is topped by him infecting the lone survivor (a guy for once) and a total misrepresentation of what having HIV means (“it’s a death sentence!”)

Absolute crap from start to finish.

tagged with gay stuff, Nu-di-ty, slasher, spoilers, what the hell!?, who finances this crap!?