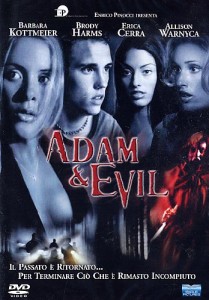 A.k.a. Halloween Camp 2: Scream If You Wanna Die Faster (UK)

“One bad apple…ripe for revenge.”

An unengaging standard-issue Canadian export centring around another bunch of jocks and their girlfriends recently done with high school and therefore celebrating with a camping trip. It transpires that two of the boys have a nasty skeleton in their closet, which could – and therefore does - have something to do with the shady psycho who’s bumping off the group one by one.

Best viewed as a parody of itself – especially given the UK title (see below) – with dialogue limited to sexual intonations for the first half and then shouty arguments once the murders are discovered and the group go gung-ho into hunting the killer before he gets them. I watched this one with a checklist and got a stunning score of 100%:

Yes, this last point is really irritating. The film, in its original incarnation, is called Adam & Evil. There’s a character called Adam, so by logic… There’s an Eve, an Yvette and an Yvonne… And Maureen and Rachel but they evidently don’t matter and die anyway. So…ladies, which of you is the psycho freakshow whackjob? Given how obvious some of the early comments made by the character it turns out to be you’ll be slapping your own forehead at how lazy they’ve been and also how dumb they think you are! Yes, you! You there with the DVD box – put it back! 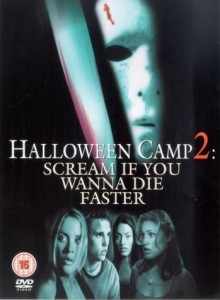 tagged with get your own ideas!, slasher, who finances this crap!?