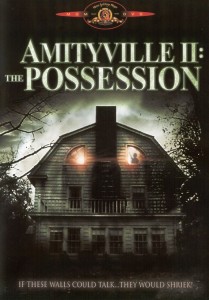 “If these walls could talk… they would SHRIEK!”

‘Tis not a slasher film, you say. ‘Tis right, it ain’t. It’s for the Final Girl filmclub and, frankly, I could do with the traffic, so here it is. Suck it!

I think I’ve seen all but two of the Amityville films and, shockingly, this is the best one and the most slashy-like, so the wisest choice for a review here, methinks.

Most folks should know the story of Amityville, Long Island. A family moved into 112 Ocean Avenue after the previous occupants were shot dead by a family member and promptly bailed out less than a month later after a series of ghostly shenanigans, which have been attributed as hoaxes in the following decades, after several books, nine films (including the horrendous remake), and loads of morbid curiosities which ended with the house proper being renovated and changing it’s address detail.

But the film. It’s a schlocky exploitation affair, a prequel to the James Brolin/Margot Kidder original of ’79, loosely based on the DeFeo family who occupied the place until they were murdered by their eldest. Mom, Dad and four kids move into the waterfront property and straightaway become the targets of an invisible force of eeeeevil who lived there first and likes its own company. Breezes blow, nobody knocks on the door at midnight, brushes paint a giant pig on the wall and numerous rooms are trashed. 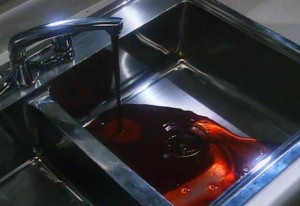 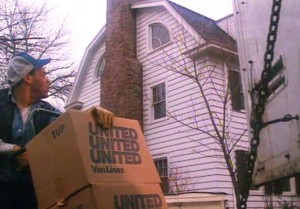 Prize-prick Dad, Anthony Montelli, blames everything on Sonny, the oldest son and likes badmouthing everybody and generally being an arse. At one point, a mirror falls off the wall after Dad hung it up. Somehow, it’s Sonny’s fault despite the fact nobody was anywhere near it! Mom Dolores (the fab Alda), tries to keep it together, while daughter Tricia somehow enters into an incestual relationship with Sonny after he’s porked by the malevolent spirit one night. 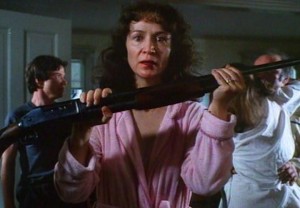 As time plods on, Father Adamsky drops by to bless the house and realises how eeeeevil it is and racks up a few boxes worth of guilt coupons when he ignores Tricia’s pleas for help and Sonny takes a shotgun to the whole clan. This occurs around about an hour into the film and thinking of the two or three times I’ve watched this film, I can never seem to remember what happens next. It gets boring, I’ll tell you that much. The haunted house stuff is all well and good, nicely dealt with and making great use of a floaty steadicam that locks many scenes into single shots. The major flaw is the first two thirds is that it all just looks…silly. Kinda like a parody with every cliche in the book tossed in to a spooky salad. 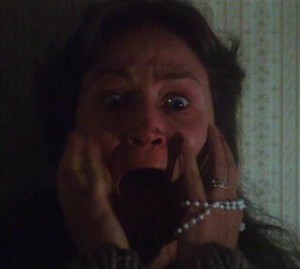 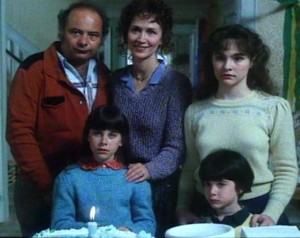 OK, so when it works it is somewhat creepy – Sonny’s alone time in the house, the basement scenes – but the family largely over act their parts to the point where I burst out laughing at some of the dire-logue: Adamsky attempts to seek help from his superior who gives him wonderful advice to this effect:

“I thought I saw a ghost once. It could have been a ghost. I don’t think it was a ghost though. I think it was something else… Not a ghost.”

Then there’s the spirit itself. Sonny slowly morphs into a freaky-ass looking thing with the demon in full residence, which talks to him through his retro foam-capped headphones, “why didn’t you pull the trigg-urrrrr?” it asks in a weird accent. We see it at the end where the film most likely earns its 18 certificate and it looks a bit dumb, but still gross. 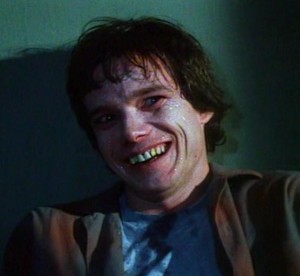 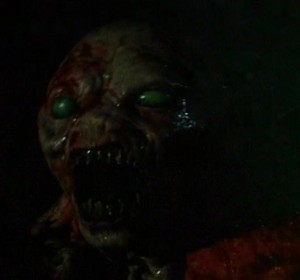 In the end, I was too bored to worry about the impact of the ending and what it all meant, wishing a director with a name was cool as Damiano Damiani had had the sense to edit it down to 70 minutes, finishing at the murders. It proves that the Amityville franchise is a bit rubbish, but at the very least the first two films and the one with that lamp are good for a laugh.

Blurbs-of-interest: Alda turned up in a few horror films around this time, she was Mrs Mendrakis in the original When A Stranger Calls, as well as appearing in Girls Nite Out and You Better Watch Out! Andrew Prine was in The Town That Dreaded Sundown.