The Joke’s on You 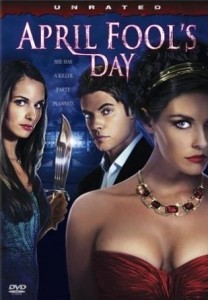 “She has a killer party planned.”

Bodycount: …is any of it real?

Dire-logue: “This is supposed to celebrate someone coming out, not going out!”

Snotty rich sibs Desiree and Blaine hold a coming-out party for Scout Taylor-Compton’s high-society debutante, which is ruined when an April Fool’s prank on Desiree’s rival, Milan (!), ends up with the poor girl toppling over a mezzanine to land atop a grand piano and totally dying.

One year later to the day, those involved in the joke are summoned to Milan’s graveside where they are confronted with a letter, supposedly from the dead girl, stating that they will each die throughout the course of the day unless the person responsible turns themselves in to the police.

Is it/isn’t it a joke dialogue ensues and, true to her word, the group begin perishing in bizarre ‘accidents’ until numbers are whittled down to the final three and a couple of twists are glued to the end for those dim-bulbed enough to misunderstand the concept of prank-themed slasher films. 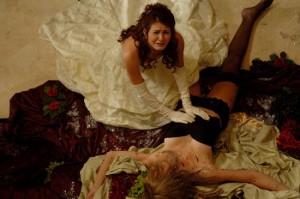 By far the worst of the remake scrum, AFD ’08, ignores everything that made the ’86 original so much fun and turns it into a cynical after-school drama production with the most unlikeable characters you could imagine. Ponsing around in their shiny cars and designer clothes, we want these bastards dead! It’s got far more in common with Cruel Intentions than any horror movie, has no heart or soul, no sense of fun, no blood, no suspense – it’s simply devoid of merit. And the twist is simply groanworthy. I wanted to attack my TV screen with a hammer at the end of this.

Scout Taylor-Compton is surely becoming some sort of slasher-remake jinx after trying to fill Jamie Lee Curtis’ shoes for Rob Zombie’s depressing Halloween redux. An obnoxious, insulting film if ever there was. The joke is most certainly on the audience.

tagged with calendar carnage, get your own ideas!, remake, slasher, what the hell!?, who finances this crap!?, yo! Hollywood