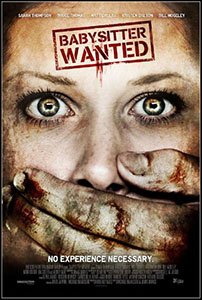 Beginning like another re-telling of the old When a Stranger Calls myth, shy smalltown girl Angie needs money for college and takes a job babysitting at a secluded farm for the Stanton family’s equally shy son, Sam. Already concerned that maybe she’s being stalked, things get worse when the phone calls begin and somebody tries to break in…

Word of mouth set up a good prospect for Babysitter Wanted and the ambience was nicely working in spite of some cringey monologues and then came the midpoint twist many positive reviews alluded to. It’s different for sure and I was surprised to find that my guess wasn’t far from the truth. The film tiptoes along the outskirts of slasher film territory without ever committing itself; Angie is held captive, escapes, is captured again, cries, screams and eventually succeeds…

And here’s the spoilage. Click away now if you don’t want to know. Go on…go…

The kid, her sittee if you will, is the Son of Satan. The ‘intruder’ is a priest trying to kill him and, when the kid’s cowboy hat topples off, Angie spots little horns-a-growin’ through his hair. The parents tie her up and explain that Sam eats the flesh of virginal girls but now they must leave as more of the priest’s followers will be on route.

It bugged me that this ‘miracle twist’ was so hammy. The film was trundling along pleasantly and then this. Once revealed, there are a couple of murders; Bill Moseley’s cop comes along trying to help and there’s some good chase action but once the kid shows his true colours, muttering “hungry” as he approaches Angie with a knife, all we really want is for her to kill him with extreme prejudice! Of course they wimp out and things are left for a sequel.

I was also suspicious of the film’s motives here; Angie is a good Catholic girl, as shown when she prays with Mom (Nana Visitor, who played Mrs Voorhees in the Friday the 13th reboot) and in her dorm room. The boy she begins ‘seeing’ is also a nice religious lad and it wouldn’t surprise me if the film were funded by a smart-thinking Christian group trying to send a message to an otherwise unreachable audience demographic here… Ergo, there’s no nudity and little swearing. Weird, weird film. Coulda been better.

Blurbs-of-interest: Scott Spiegel (the doctor at the end) directed Intruder; Moseley was recently in the horrendously bad – and curiously also web-overrated – Home Sick.