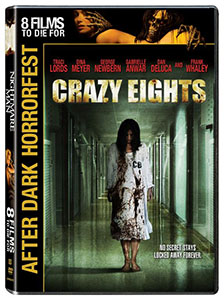 “No secret stays locked away forever.”

The words ‘Traci’ and ‘Lords’ attached a serious horror film should trigger an involuntary retraction of the reaching hand as you browse HMV’s horror section. To save 77 minutes of your sanity, here’s what happens:

Title cards tell us that between the 50’s and 70’s, 600 children were ‘volunteered’ into this program where they were experimented on and most were never seen again yadda yadda… In the now, six ex-inmates gather after another old friend dies/commits suicide/bails from production and go to the now closed institute to dig up a time capsule and soon get locked in and hunted by the ghost of girl inmate they used to know.

The title refers to the name of their baseball team but has no other relevance, probably just to give the viewer some sense of mystery, as this apes so many Asian horror cliches; girl ghosts appearing in mirrors, corridors and the like. Only Meyer’s admirable struggle to do something with her restricted role is of interest as there’s next to no bloodshed or scares. You’d need to be crazy to bother with this one.

Blurbs-of-interest: Meyer was Stallone’s doomed wife in D-Tox. Anwar was later in iMurders.

tagged with children are evil, get your own ideas!, slasher, who finances this crap!?