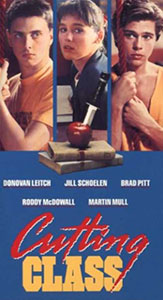 “Some people would kill to fit in.”

When you consider that bona fide masterpiece Heathers was made in 1989, it’s difficult to look at its ‘lesser’ contemporaries without making a direct comparison. In a head-to-head, Cutting Class would surely lose, but then, I don’t think any other teen film from that year would best Heathers…

So it’s a slasher film with comic trimmings set at Wurleigh High School, where student Brian Woods returns from five years away in the looney bin, where he was sent for cutting the brakes on his father’s car. Fatally so.

Brian attempts to rekindle his relationship with best bud Dwight, who’s keen on anything but, while his girlfriend Paula can’t help but notice the way Brian…leers in her direction a lot. Behold, in true Final Girl stylee (all credit to her), the many stares of Brian: 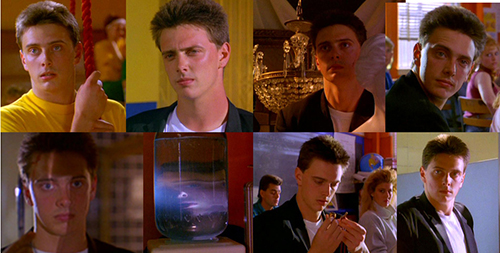 This minor in-any-other-film-it-would-be-romantic quirk aside, there’s a homicidal shadow looming over the school as teachers and students fall victim to a lurking mystery killer, who’s inventive enough to utilise pottery kilns and  photocopiers as well as the usual axes and knives to do away with his prey. There are some convenient suspects in the arsey janitor (“I’m the only teacher you’ll remember!”), Roddy McDowall’s pervy principal who enjoys nothing more than letching over Paula and, of course, Brian himself, who is naturally blamed when the vice-principal is photocopied to death… 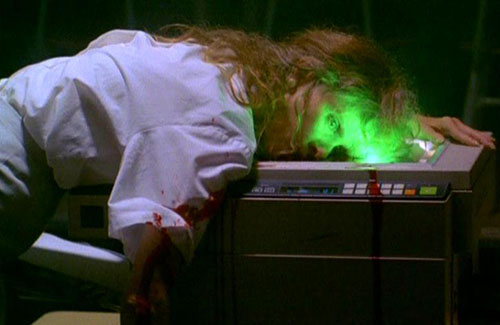 As things trundle on, it becomes clear that the killer is one of two people – Brian or Dwight. So cast heartthrobs Donovan Leitch or Brad Pitt it is! Would it be too obvious if Brian was indeed the psycho rather than Dwight’s basketball ace? It depends how you look at it. Dwight is an asshole, the type of jock-character we want to see dead in any other stalk n’ slasher.

Paula, on the other hand, is not only the archetypal nice girl heroine, cheerleader, comfortable virgin and straight-A student, but she’s also played by the fabulous Jill Schoelen, the lesser-known Jamie Lee Curtis of the later 80’s horror circuit.

Paula’s also the daughter of the local District Attorney (Mull) who put Brian away and was the first victim, shot with a bow and arrow on his duck-hunting trip. He actually doesn’t die there and then and we return to the running gag of his attempts to raise the alarm and get to safety…

Things kick into a more entertaining gear once the killer is revealed via a mathematical equation, no less and the memorable one-liners start firing… The fleeing victims’ failed attempt to outsmart the maniac using chemistry is met with a “nice try though” from him and he later asks Paula to “feel his tingle” as she’s pushed to the limit of using violence when running away proves futile. 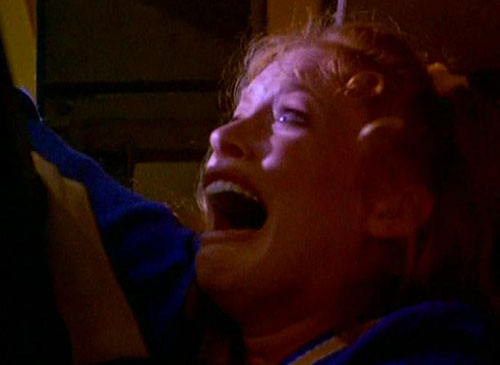 Cutting Class is a prime example of everything late-80’s, from the quirky music, to the fashions, the hair, and the cars. It’s fun for a once-over, however it unfortunately wasn’t remastered for the DVD release and looks grainy and cheap, with limited and amateur looking blood-letting, exposing its budgetary and creative constraints, in spite of some real names on the cast roster and an indecisive streak that renders it unable to decide between needing John Hughes or John Carpenter! Give it a try.

Blurbs-of-interest: Jill Schoelen did a few halfway decent horror films, including The Stepfather, Popcorn, The Phantom of the Opera (with Robert Englund) and When A Stranger Calls Back before disappearing from the screen for a long, long time. Nancy Fish was also in Dr Giggles; Dirk Blocker was also in Night of the Scarecrow.

tagged with before they were famous, death on campus, Nu-di-ty, slasher, star power, the 80s