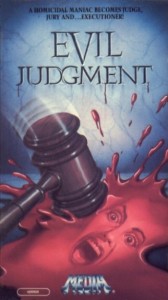 Dire-logue: Dino – “You know, where I come from they strap hookers to a mule and run ‘em out of town.” April – “Yeah, is that how your mother came to America?”

I possess a strange fantasy about living in Canada. But maybe it’s not all trees, lakes, and Celine Dion. At least, if the Canadian embassy handed out copies of Evil Judgment instead of DVDs showing video of the a fore mentioned things, I might change my mind and go for Australia instead. Hmm…don’t like the sound of those killer spiders.

EJ isn’t a dire film. Canada makes good slasher films as it happens. Except for Study Hell. Alas, this is no Prom Night or My Bloody Valentine. This possibly explains why it wasn’t released until 1984. Unlike those other films, EJ is an ambitious little tike, deciding to take a handful of stalk n’ kill and shove it in the mouth of some gritty cop thriller and sprinke a Mafia plotline overhead. When I was young I didn’t think the Mafia was real. Chalk that up there with the Canadian life-plan.

Anyway, Janet is a bit of a wimpy, naive waitress who moans enough about her lack of cash that hooker gal-pal April talkes her into accompanying her on a little menage a trois at some wealthy judge’s mansion for $200. Janet reluctantly goes but soon regrets it when both April and the judge get their throats slashed.

She wakes up in hospital and is told by arsey detective Armstrong that she tried to kill herself. ‘Bullshit,’ she says, ‘I so escaped from a psycho looney killer!’ He’s all; ‘who’d believe a junkie whore?’ and she’s like; ‘I’m a waitress, man!’ The only person who seems to take her seriously is her hot n’ cold boyfriend Dino, who’s the dude with the Mafia connections.

The killer returns to try and do away with Janet and she and Dino decide to play Fred and Daphne and soon discover a whole conspiracy to do with the murdered judge, Armstrong and some botched trial. I lost interest here for a while until the killings were reignited. The assailant finally puts in an appearance and here I paid my dues for not paying attention as I wasn’t sure who he was or what was going on. I’ll blame the aged VHS copy and the tracking on my player. I don’t feel like watching it again.

The main shortcoming in EJ is the acting. Or, lack of. Pam Collyer, as Janet, isn’t so much bad, more that she feels the need to annunciate each and every word of her dialogue, robbing it all of any tension or meaning. The film’s rarity meant it escaped being scissored and there are some grisly throat slashings chucked in (mainly women of course) and, with a higher budget and more taut scribing, this could have been a minor cult classic. As it is, there’s not much her to earn a recommendation from me. Of course, feel free not to pay heed and dive in headfirst, it’s what I’d do. And should ‘judgment’ have a second E? J-U-D-G-E-M-E-N-T ?

tagged with Canuck, slasher, the 80s