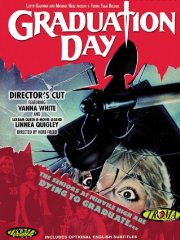 Dire-logue: “You have lovely eyes. My sister had eyes like yours. She’s dead now.”

Back in 1996 I read a book called Games of Terror, one of only a few theoretical insights into stalker movies (as they were dubbed by the writer) and of the films briefed, I found all but Graduation Day within a couple of months – bearing in mind this is long before DVD back-catalogues. Hell, it was before DVD! Six gruelling months of trying to bag a copy, a local collector sold me his VHS tape for £9 (along with Madman) and I merrily skipped home for the premiere.

Graduation Day is one of those ‘meh’ films. Probably due to overexposure to lost classics of the period (Prom Night, Happy Birthday to Me, Terror Train), or possibly the fact that the film is just a bit crud, finding things to like about it is a bit difficult. 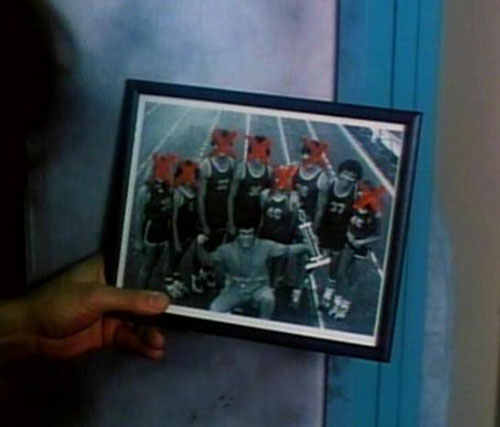 Proceedings begin in the usual way, with a past event trauma that spurs on the killer at a later date and gives him something to talk to the final girl about. In this instance, over the groove-tastic disco stomper that plays through the credits, a female track runner – Laura – sprints to glory before falling down dead. We’re later told this is down to a blood clot, but everybody else blames the track coach for pushing her too hard.

A couple of months later, Laura’s military ass-kickin’ big sis Anne returns from abroad to collect a special graduation award in the dead girl’s memory. Meanwhile, a black-gloved killer is stalking and slaying the other members of the track team, clocking in all murders at just thirty seconds, the same amount of time it took Laura to win her death race. First to go is big-headphones jogging girl (throat slashing), followed by moody gymnastical-girl (sword through the neck)… 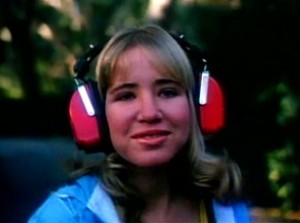 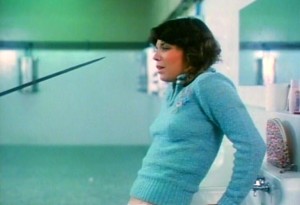 In between kills, our killer stops by his gym locker and draws a big red cross over the face of the most recent victim, working his way across the picture from left to right.

At this time, some other, less important characters (suspects!) are introduced. There’s Delores, played by bad movie fixture Linnea Quigley, who will do anything to pass her music class, including seducing the face-like-a-slapped-arse teacher. There’s also an affair going on between the principal and his secretary, which contributes nothing to the slashathon we’re anticipating. Leery campus cop MacGregor likes to clamp down on the dope smokin’ students and creep around in the trees and the despised track mentor Coach Michaels, whom everybody blames for the accident. Lastly, is Laura’s grieving boyfriend, Kevin, who is all sensitivity and broodiness. Hmmm… 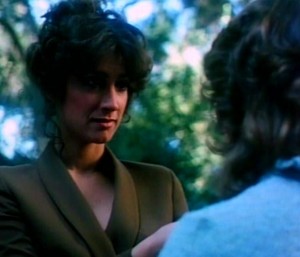 <<< That’s Anne. Anne is our final girl, although she looks a bit like a final drag queen, don’t you think? That’s a lot of makeup for a military recruit. Gasp! Maybe she’s hiding something!!

I digress… While the boring characters talk about graduation ceremonies n’ shit, the killer offs a few more budding athletes. The third murder is truly that old classic of homicide: the football with the sword protruding from it. That’s an American football, by the way, and Mr Killer tosses it back to its owner who catches it sharp-end first. Watch in awe as the sword-ball spins in slo-mo through the air, defying all laws of gravity and credence as it goes! There’s some time out for a song about graduation and a roller-disco that boasts a seven minute nu-wave rock song while another couple of kids are chased and murdered outside. Although decapitation may be preferential to skating in circles and listening to Felony’s ‘Gangster Rock’ 12″ extended rollerboogie remix. Actually, when I re-watched the film recently, I noticed that they actually sing the song three times on loop.

Let’s take a moment to celebrate the interesting look that Felony employ:

Morning comes and brings with it news of the missing teenagers, but the principal is more concerned with the logistics of the day and ignores it. A couple more deaths ensue and then a couple of squealy girls (one of them played by Wheel of Fortune letter-turner Vanna White; below) discover the body of moody gymnastical girl stuffed in a locker and blame falls on Coach Michaels, who’s just been given the boot over the whole Laura thing. 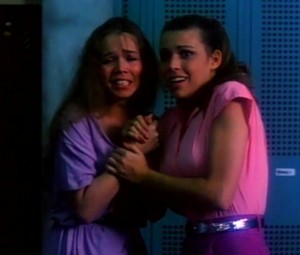 A right kerfuffle ensues and the killer’s identity is finally revealed, much to the surprise of nobody except the cast members and Anne is soon thrown into direct combat, which allows more corpses to swing out on doors, severed heads to be found on crash mats and the like…

Graduation Day is one mess of a film. There’s some nifty speed-cut edits thrown in but some simple shots are completely screwed up with demented high-speed zooming. It’s the film they should remake but probably never will. Amidst the bad scripting, some horrible acting and diabolical pacing problems, there are remnants of a good tale here, it’s just tangled up by the crowded supporting cast, many of whom aren’t required at all. If you wondered about the blonde girl who disappears early on without explanation (Diana), the actress was fired and replaced by Quigley for refusing to disrobe on screen. 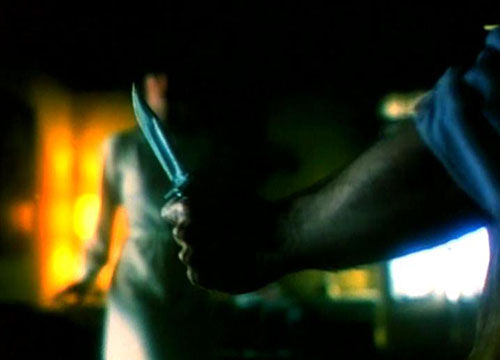 Director and scribe Herb Freed appeared in the 2006 documentary Going to Pieces to add a few tidbits about his film – the fact that he’s now a Rabbi may indicate he’s moved on. And if you’re wondering why I was so generous with my rating, I’m trying to justify the six months spent looking for the damn thing. 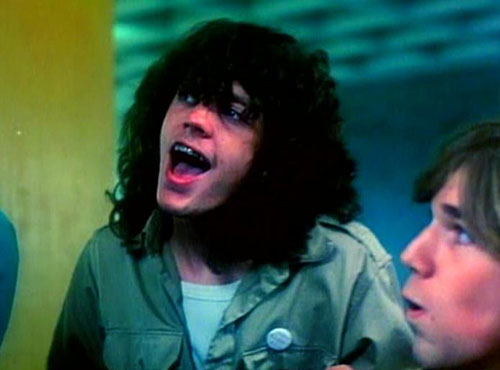 I want to be this person’s best friend

Blurbs-of-interest: The make-up effects here were all courtesy of a woman (!), Jill Rockow, who later worked on Friday the 13th: The Final Chapter and Boogeyman 2. Editor Martin Jay Sadoff worked on Friday the 13th‘s Part III and VII. Christopher George was in both Mortuary and Pieces. Michael Pataki appears as Dr Hoffman in Halloween 4. Carmen Argenziano was Dr Mendrakis in When a Stranger Calls and later turned up in Identity. George and Quigley turn up all over the place.

tagged with calendar carnage, death on campus, hair don'ts, Nu-di-ty, slasher, slasher films that aren't supposed to be funny but are funny, star power, the 80s