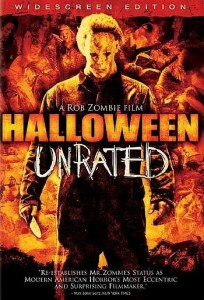 “Evil has a destiny.”

*varies depending on version

Remakes. Ree! Ree! Ree! Clashing thunder! Hell rain! Lava volcano spurting grossness from the depths of hell eeeeeeevil!! A divisive subject if ever there were, not least of all to the faithful horror fan.

You could blame Japan for all those spooky girl-out-of-the-TV films, they’ve resulted in a lot of remakes, as have Euro horrors, most recently the Spanish glut. There’s a real topic here that I could banter on about for pages and pages about, but we’re here to talk about the ballsiest remake so far… Halloween.

The original Halloween, made the same year I was, is an undesputable classic, a horror film so important it never fails to appear on lists of the best horror films ever made… So, after the uninspiring mish-mash that was Resurrection, the death of the series’ executive producer and nothing happening with a ninth entry in the saga, somebody suggested a reboot. Worked box-office magic for The Texas Chainsaw Massacre. But Hallo-fuckin-ween? Who’d dare to take on that gargantuan task? The name’s Zombie. Rob Zombie.

As you can see here, things don’t look so different… Creepy stalky Michael, Doc Loomis, Laurie and her doomed gal-pals. Be not fooled, Halloween 2007 is really very different from John Carpenter’s bargain city masterpiece. One of the original ideas bandied around for Halloween 9 was an origin tale of Michael’s years at Smith’s Grove prior to that night. It’s been half-realised in the first hour of Zombie’s effort, notably the better half of a seriously difficult to comprehend project. 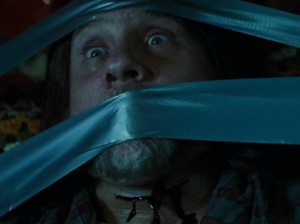 Michael Myers is now the middle child of good natured stripper Deborah Myers, who lives with abusive layabout Ronnie, her slutty daughter, Michael, and baby sis who I think was called Boo, but I couldn’t tell. Mike’s got some hot-probs, most concerningly, he’s violent n’ stuff, shown to us when he clubs the school bully to death before offing step dad, sister and sister’s boyfriend on Halloween night. He’s shipped off to Smith’s Grove under the watchful eye of Dr Sam Loomis (McDowell) and we follow his progress there for the best part of an hour, his sinking into a darker place of the soul, further violent outbursts and the eventual suicide of mom. 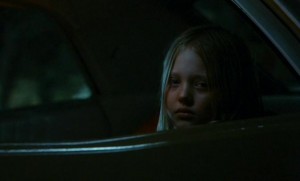 Fifteen annums later, Michael has miraculously grown from sub-five foot Avril Lavigne look-a-like child to hulking looney bin fixture. Now, the scenes in the asylum vary between the theatrical and unrated versions. In the former, Michael flips and kills a gaggle of security personnel and other employees, leading to his escape, whereas on DVD, the rape of another inmate by a couple of nasty guards sets off this psychosis. Either way, he’s out!

It’s fair to say that up to this point, Zombie has created a pretty good horror film. It’s grisly and littered with his trademark white-trash elements, grime and sleaze, but there’s a thoughtful strain running through it all, a feeling of, dare we think it, sympathy for Michael!? It’s this development that effectively skewers the second half and turns things into a bit of a crapfest. Haddonfield is presented the same as before, a small, tight community where crunchy leaves adorn the pavements and children are revved up for the night’s candy-flavoured surprises.

It’s the characters we meet that begin to unveil a less wholesome insight into things. Think back to Jamie Lee Curtis’ Laurie. The good girl who wasn’t a swot, she was shy, the doormat to her promiscuous friends. You loved her, wanted her to be your friend, your babysitter. Laurie ’07, played by Scout Taylor-Compton, is a bit of a cow.

She’s smarter than Annie and Lynda, we know this because she wears glasses, but she’s just not very…nice. She’s OK, I spose, but the way in which she greets Tommy shows this Laurie is less model teen, more selfy smart girl. Annie and Lynda are essentially no different than before, just more profane. Lynda is only in two scenes (three if you count the one where she’s dead) and only says ‘totally’ once. Annie is a more interesting story, played by Danielle Harris who was, of course, Jamie Lloyd in Halloween‘s 4 & 5 until the character was cruelly offed in 6. She wants sex with Paul, Lynda wants sex with Bob. They all have sex (or at least attempt to), three of the four die as Annie’s fate is left dangling in a strangely hollow scene. 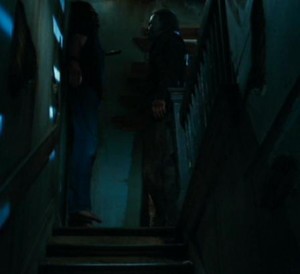 The stalk n’ slash process, which made up a good 75% of the original film, is shrunken down to next to nothing in pacing terms. There’s no tension to speak of. Characters are killed off very rapidly, very violently and the last half hour is nothing more than Laurie and Michael playing cat and mouse around the abandoned Myers house. He initially kidnaps her to try and forge some twisted sibling connection thing but, as she has no frickin’ clue she’s adopted, doesn’t quite work out so he decides to kill her instead.

Things end very definitely. Laurie gets to ask Loomis if ‘that was the Boogeyman’, to which he responds ‘yes, as a matter of fact it was’, more violence erupts and there’s no sign of any obvious strands by which to attach a sequel. But then it was only a few sequels ago that Michael recovered from total decapitation… 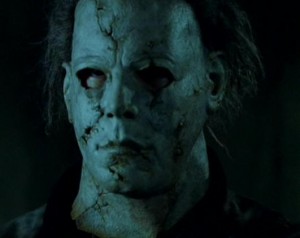 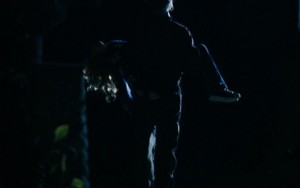 As you can tell from the screencaps, Zombie has created a handsome picture, far more professional looking than 95% of the teen horror films from the last decade. So, what’s the prob, chief? In a word: Laurie. The final girl is at the centre of the slasher flick, without her, it’s pretty much dead in the water. The same outcome occurs when said final girl is undeveloped or obnoxious. I didn’t give a toss if Laurie lived or died this time around, the only character we learn anything about is Michael! This shift of alliance to the killer ruins most horror films, it was what stopped Freddy being scary, what made Jason’s latter outings exercises in rinse and repeat teen-killing. Having said that, I hated this film the first time I saw it, hated it to the point of wanting to cry… A second viewing only cemented that the Haddonfield-set part of it does indeed suck beyond the telling, but that also Zombie’s talent lies in the story of Michael’s past, that he can create a scary psycho out of a floppy haired child and piece together a genuinely engaging horror film beyond the unhinged exploits of his previous psychadelic gorefests. 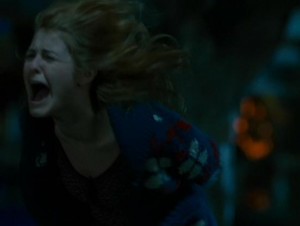 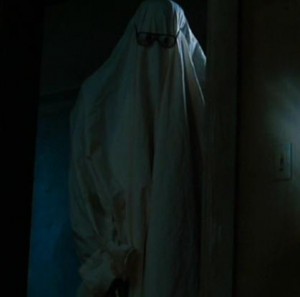 Blurbs-of-interest: Taylor-Compton continued her retread sins by appearing in the worst of the bunch, the DVD crapfest that was April Fool’s Day. Aside from her previous series appearances, Danielle Harris was also in Urban Legend, Blood Night, Hatchet II, and ChromeSkull: Laid to Rest 2. McDowell was in The Surgeon, Silent Night, and Mischief Night; Brad Dourif, of course, was the voice of Chucky in all of the original run Child’s Play films and the TV series, and also turns up in Trauma, Dead Scared (The Hazing), Color of Night and Urban Legend. Dee Wallace was in Jeepers Creepers: Reborn, Scar, Dead End Road, Popcorn, and Red Christmas. William Forsythe was in Hack and iMurders. Kristina Klebe co-produced and had a small role in BreadCrumbs. Udo Kier (no idea who he plays in this) was also in Pray for Morning, Fall Down Dead, and The Editor; Ken Foree was in Leatherface: Texas Chainsaw Massacre III and Phantom of the Mall.