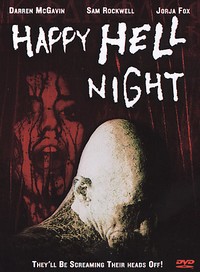 Dire-logue: “Technical difficulties – please do not adjust your dicks.”

A rare throwback to the cliches of 80s horror, possibly rendered as such due to its startling similarities to Hell Night proper, the Linda Blair mini-masterpiece about fraternity and sorority pledges being offed by a legendary thought-dead killer. Considering this flick was titled Hell Night for its UK video release and, if you look at the title card, one might think that the producer’s tacked the word ‘Happy’ on as an afterthought once they realised just how alike it was to the older film.

A Yugoslavian/Canadian production, HAPPY Hell Night also revolves around a fraternity hazing stunt and the murderous subject of a local legend. The boys of the Phi Delta Sigma frat house are looking to win the competition for the most outrageous initiation prank, which will induct house president Eric’s lil bro Sonny into the brotherhood, thanks to some poking and prodding from dad Darren McGavin, an ex Sigma with some grisly secrets…

As Hell Night kicks into swing, Sonny and another dorky pledge are sent off to photograph Zachary Malius, a Satanic priest rotting in a conveniently local institution for the last quarter of a century after slaughtering seven Sigma’s and a local girl. Expectedly, they fuck up their assignment and Malius totters from his cell and crashes the party, swinging a nifty ice-axe all the way! A handy powercut ensures most of the party revellers leave and there are some comical shocks; one nymphette is dim enough to handcuff herself to a bed frame and toss the key across the room, and there’s a rocking chair decapitation gag and gobs of nudity as expected. 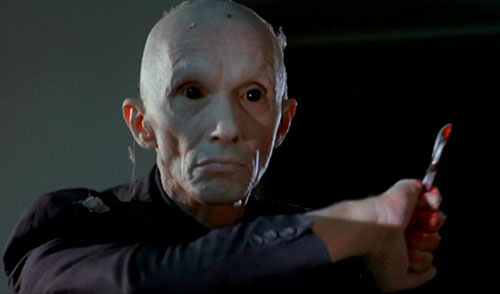 In spite of its status as something of a collectible (prior to DVD at least), HAPPY Hell Night is surprisingly well made and adequately violent with a sprinkling of semi-knowns peppered throughout the crowded cast roster: Sam Rockwell plays a young McGavin and future CSI star Jorja Fox is an early victim. One of the inbreds from Wrong Turn also appears as the requisite dorky prankster. The characters are quite intriguing too; brotherly love is tested between Eric and Sonny as they’re both giving it to the same girl, who is the nominal heroine.

However, Malius is the star, commenting on each kill as he goes with such witty repartee as ‘No TV!’, ‘No sex!’, ‘No hope of international distribution!’ He’s like an overgrown, homicidal E.T., complete with overlarge black blobs for eyes and, admittedly, quite a creepy looking dude. This was one of the first slasher flicks I ever saw and I hated it at the time, but revisits have shown that it’s a fun little timewaster with cheesy dialogue, soap-opera acting and lots of Latin prayer-sayery at the weirdo ending. Try it and see!

tagged with before they were famous, Canuck, death on campus, hair don'ts, Nu-di-ty, slasher, star power