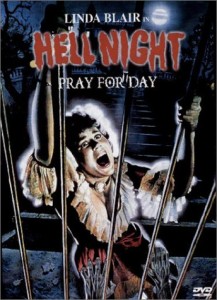 In the cynical we-know-everything days of 2009, a film with a premise so simplistic as Hell Night is likely to be casually dismissed as ancient crap. It’s long and slow with a low body count – why bother? Because it’s one of the best slasher films going.

The Alpha Sigma Rho fraternity and its sister sorority are initiating four new pledges on their annual ‘Hell Night’. The costume party is over, we’ve met the primary cast of just seven young scholars, and we’re off to the unloved grounds of Garth Manor, where the Garth patriarch once slaughtered his entire family, save for ‘gorked out’ Andrew, who is said to still dwell within the creepy old mansion.

Jeff, Denise, Seth and Marti are sequestered to the venue and instructed to stay in the house until dawn, when they will be let out. Once left alone by the upperclassmen, the quartet briefly explore and then pair off; Seth and Denise engage in overlong foreplay while Jeff and Marti go heart to heart and discuss their lives, the class system and various other things.

Outside, three of the senior collegiates – May, weasely Scott, and uber-prankster Peter – return to try and scare them with a range of pre-organised tricks. Ghosts appear, death-screams echo down the halls and a real killer begins stalking and slaying all those who intrude on his property! Andrew Garth lives! A few killings in, the murders are discovered and Seth manages to climb his way to freedom in a bid to summon help while Jeff and Marti look for a missing Denise and uncover the extent of the nightmare… 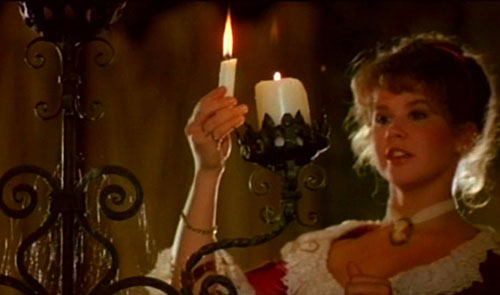 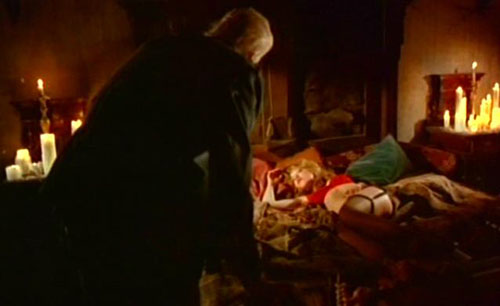 The appeal is in the straight-forward telling of it all. It’s got classic creaky haunted house origins, aided no end by the period costumes worn by the characters, the candelabras and cobwebs, Nosferatu-influenced creeping shadows, all engineered into a (then) modern slasher narrative. Characters are also well drawn given that the entire thing is set on one night; Linda Blair, all grown up from playing Regan MacNeil, makes for an affable heroine in Marti, a mechanically gifted student. Her three companions range from misunderstood nice guy (Jeff), to surfer dude (Seth) and comical British partygirl (Denise), while the trio of pranksters have less to do. Why the two main guys are Jeff n’ Seth is something we’ll never know I guess… 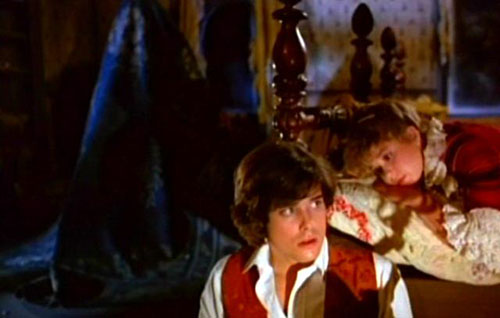 The emphasis on atmosphere is a strong selling point here; the house is creepy and the story just offbeat enough to be unsettling. “This was supposed to be a joke,” crows Marti when she and Jeff find time to reflect on the night’s events. All things considered, definitely not a film for all to enjoy. It has that nostalgic ‘this scared me as a kid’ quality going for it, something we’re unlikely to experience again. Karen Carpenter sang ‘Tryin’ To Get That Feeling Again’, Hell Night still maintains a big part of ‘that’ feeling. 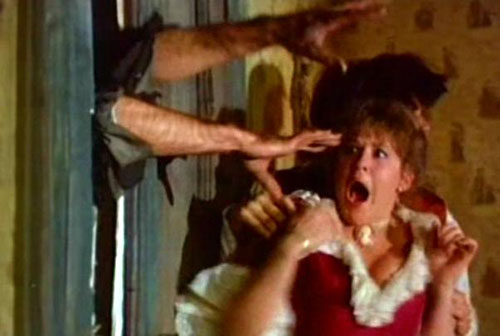 The bad news: a PG-13 remake, almost certainly similar to the dismal Prom Night redux, is due in 2010. Don’t expect any nostalgia there.

Blurbs-of-interest: Blair made a return to the slasher film in 1988’s hilarious Grotesque;  Barton played Doug in Friday the 13th: The Final Chapter; Jenny Neumann had already played the lead in Aussie theatre stalker Stage Fright. Several of the producers worked on other slasher flicks, including Halloween, and Chuck Russell directed A Nightmare On Elm Street 3.