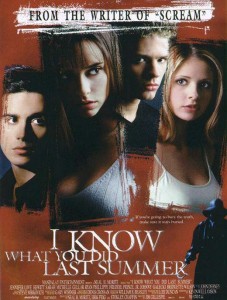 I KNOW WHAT YOU DID LAST SUMMER

“If you’re going to bury the truth, make sure it stays buried.”

Dire-logue: “Come into the back seat, I’ll let you do things to me.”

I used to post on a horror forum that spewed bile at the mention of most slasher flicks made post-1989, in particular this film. It was hated. Hated with the fire of a thousand suns. “You’re not a true horror fan if you like it!” I was once told. Yeah, cheers for that. This was a few years back, mind. Now it’s kinda old school, the film the next generation of slasher kids’ll say was from the good ol’ days when characters were likeable, plots made sense and you could go to town and back, have dinner and see a movie for under a fiver.

Me, I always liked this one, and when it came out I’d already OD’d on the 80’s flicks, so I wasn’t being, like, totally obnoxious, dude. The 90’s clutch slasher flicks came out in my prime years, I was about twenty, studying film, teen horror was exploding all over again thanks to Scream (or so Scream would say). In the UK it had the oh-so sensible release date of December. Winter. Off through the drizzle and freezing wind to see a film full of gorgeous people set in the summer. Hmph.

Shot as a reaction to Scream‘s success, Last Summer was, once again, scripted by Kevin Williamson and based on the 1973 novel by Lois Duncan – who reportedly hates the movie and whose name does not appear on the opening credits – in which a quartet of teen friends guilty of a hit and run accident the previous year are tormented by creepy notes and psychological games. However, in the book nobody is murdered, hence Duncan’s hatred of the film, which turned her morality tale into a hack n’ slasher. That said, Last Summer is a tame film by any comparison, with little on-screen violence and characters with sensibilites absent in most of the genre examples that preceded it.

Celebrating their last summer of “immature, adolescent decadence,” smalltown couples Julie and Ray and Barry and recently-crowned beauty queen Helen, head out to a local beach where they drink, fool around, relay urban legends about hook-handed killers and drive back to town along a windy coast road where they mow down a midnight pedestrian. In shock, the boys convince the girls that nobody would believe Ray was driving pisshead Barry’s car and they’d all go to prison. Helen catches on but Julie wants to go to the police. She is outvoted and they toss the body off a dock, but not before he proves he’s not quite dead… 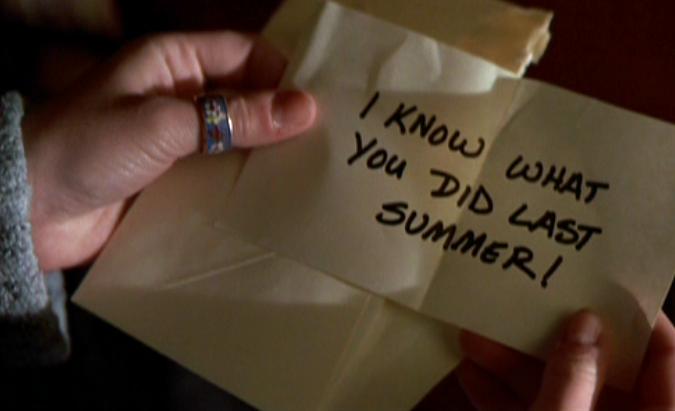 One year later, a now sullen, miserable Julie returns home from college and receives a note with the title of the movie written on it. It turns out that the hopes and dreams of all four of them have been dashed and she tracks down Helen working at her father’s store, under the supervision of her bitchy older sister Elsa (maybe she knows what they did last summer?); Barry is also back from college and still a prize prick and Ray has become a fisherman. They discuss the note, what it means, and decide that it’s from Max, another local fisherman who drove by on the night they had the accident. He might know what they did last summer too… 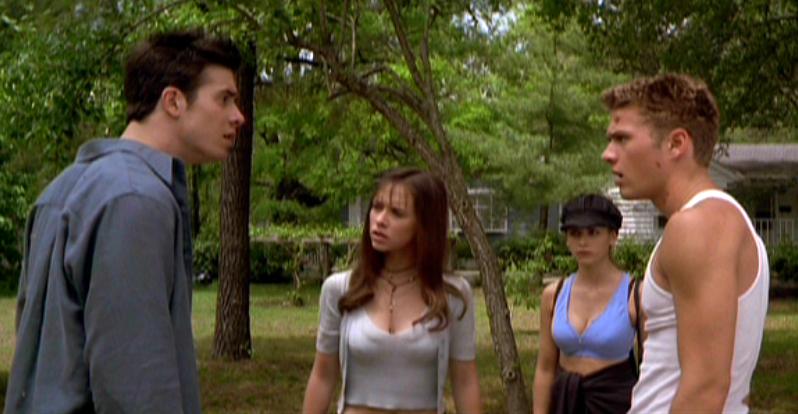 Well, actually he doesn’t as five minutes after an altercation with Barry, Max gets a big-ass fishhook through the chin. Sensing that notes aren’t enough, the killer cranks the harrassment up a notch and runs down Barry with his own car. Forced to reconsider their situation, the group soon find that their tormentor really means business as he edges ever closer to consumating their one year anniversary – July 4th, another calendar date to avoid! Helen has her ever important hair cut off while she sleeps and Julie finds Max’s body stuffed in the trunk of her car. 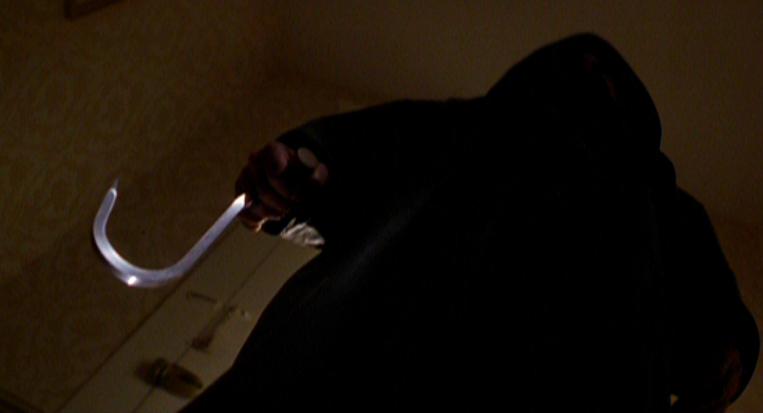 Psycho killers are anal about commemorative dates, they never miss an appointment and Captain Birdseye’s Evil Twin is no exception. As night falls, the killings begin… This is where I Know What You Did Last Summer kicks in and kicks ass, peaking with the supremo chase scene where he goes after Helen. It’s highly reminiscent of Wendy’s never ending marathon of fear from Prom Night (which, you’ll note, shares several overlapping story aspects); in her lovely dress, Helen kicks her way out of a squad car, runs, stumbles, hammers on the door of the department store while Elsa faffs with the keys, drops from a high window and staggers bear-footed through some backalleys… It’s a long, drawn out, but very well done scene. 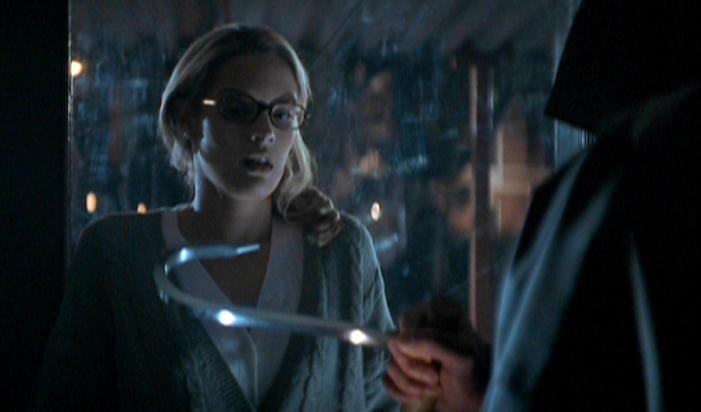 Once Helen and Barry have been done away with (along with a couple of extras who got in the killer’s way), Julie’s investigating leads her right into the killer’s trap. Or, as it’s called in the trade, a boat. The trawler-set finale is certainly different and Julie goes through all the usual final girl things, hearing out the killer, hiding, screaming lots, all the Jamie Lee-set industry standards. Things end another ‘one year later’ with a cool jump scene right out of a Friday the 13th. 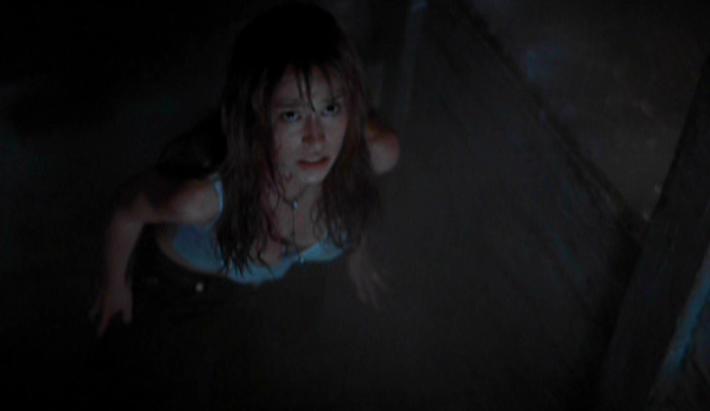 Buffy didn’t begin on UK TV until the end of 1997 and nobody really knew who Sarah Michelle Gellar was at that point; in hindsight it’s easy to question why she didn’t just kick ass! But it’s good to see a genre icon adopting different roles – hey, JLC never got to play the slutty cheerleader! Jennifer Love Hewitt (at the time in Party of Five with Neve Campbell) makes an interesting, if yet obvious heroine who shrieks effectively and does all the things we expect her to. The boys play their standard-issue boy parts well but are overshadowed by their female counterparts. I tell ya, horror is the only genre where this goes on! Oh, and some reverse perving… 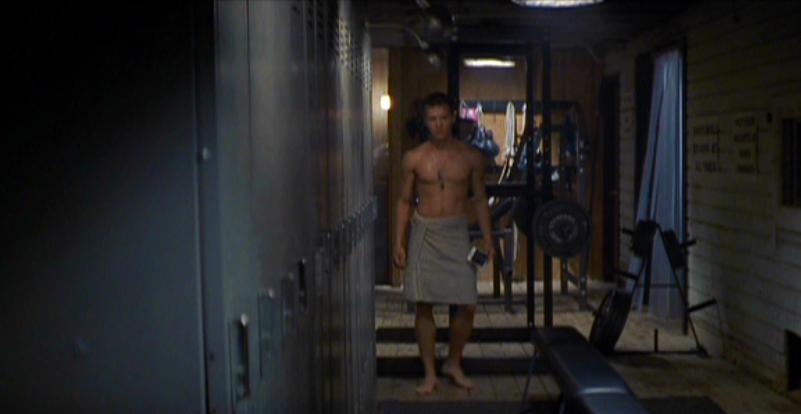 I can see why some purists don’t warm to this flick; it’s big budget and full of surface gloss and has a preference to build characters and work on dialogue rather than bloodshed in a genre that trades on minimal-everything (except skin). Perhaps they saw it as an insult to the films they held so dear…? There’s no exploitation here, no girls running around naked, marking a point where slasher films became appealing to both genders… The suckiest thing I can say about it is that the DVD has no extras… Not one. Who knows, it works for me just the same as My Bloody Valentine or Terror Train. Can’t I love both?

Blurbs-of-interest: Hewitt and Prinze returned for the cheeseball sequel; Gellar had a cameo in Scream 2; Anne Heche played Janet Leigh’s role in the 1998 Psycho remake. Jim Gillespie later directed D-Tox and the Williamson-scripted Venom. Several of the producers worked on reams of similar films in the same era, including Urban Legend. Readapted as a TV series in 2021.

tagged with before they were famous, grrr men!, I know whatcha did!, slasher, yo! Hollywood