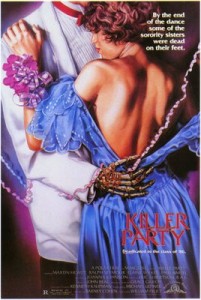 Direlogue: “…And now your yearly film on the dangers of hazing.”

It’s a real shame that lots of these old B-movies haven’t yet made it to international DVD distribution, that’s why there’re sod all screen shots of it here as I have no idea how to cull those from my love-worn VHS copy.

Killer Party is a curious little gem with few fans. Reportedly shot in 1984 and then shelved for two years before MGM cut out most of the bloodletting and gave it a minimal release, like most of the Canadian slasher films of this era, it’s a fun pic with likable characters and a good sense of humour mixed in with the horror, which, here concerns college gal-pals Phoebe, lovable nerd Viva and the hesitant Jennifer and their attempts to get into Sigma Alpha Pi – “the best sorority on campus”. Hi-jinks and pranks are to culminate in the girls’ acceptance at “goat night” (!?), which will be held at the requisite haunted frat house, where a lone gravestone sits in the overgrown yard for a brother who died in a hazing prank two decades earlier…

Murders begin to plague the campus and, once the party is in full swing, a psycho dressed as – of all things – a deep sea diver – stalks and slays those left in the ol’ house… This flimsy-sounding plot doesn’t do Killer Party much justice: from the double-fake opening, featuring a film-within-a-film-within-a-music-video (White Sister’s 80s-tastic April – which is available on iTunes), to the demonic possession outcome via Paul Bartel as a pompous lecturer and the kinda-sweet romance that develops between Jennifer and cute frat boy Blake, all panning out well thanks to well-written dialogue and a self-effacing sense of humour, most of it spoofing the ridiculousness of fraternity/sorority initiations (the goats-eye ceremony is great).

Working against the film is probably the cut n’ shut nature of the editing: most of the violence takes place in the last thirty minutes, much of it confused and disempowered by the removal of money shots and there are some characters who completely disappear from the film altogether. There’s also a curious heirarchy to the credits, with Martin Hewitt and Ralph Seymour getting first billing, despite their comparatively small roles compared to our plucky heroines. Ultimately, it’s this trio of spunky girls that makes Killer Party a real party flick with a few familiar faces to spot for genre aficionados and doesn’t have to stoop to dire cliches to make you laugh at it – although the credits’ song – which sounds like Bananarama suffering with avian influenza – leaves a lot to be desired. Any way you look at it, this film’s cool for being so un-cool and you should go and find a copy.