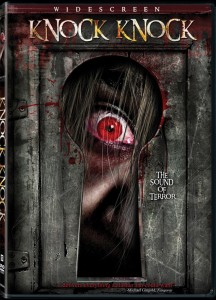 “Answering the door will never be the same again!”

Grizzled ex-NYPD cop Mike Soato (Mastrantonio, no relation to Mary Elizabeth it seems…) swaggers in with the intention of getting to know his estranged granddaughter and steps on the (female) lead detective’s feet when deciding to ‘help’ with the investigation until they learn to work together. Also known as, she shuts her mouth and becomes completely subservient to his ‘cop wisdom’, which includes such epiphanous insights as “I don’t believe in coincidence!” and a whole lunch tray full of similar cop movie cliches.

But then, that’s all Knock Knock is, a factory line of seen-it-all-befores with particulary horrendous acting from all involved, the usual teen exploits and exploitations (shower scene included), rubbery gore effects and a remarkably annoying character in Soato, who talks with an exaggerated Noo Yawk accent and needs a decent haircut. Cut n’ dried cheapness sinks this one from five minutes in.

tagged with accents from hell, hair don'ts, Nu-di-ty, slasher, who finances this crap!?