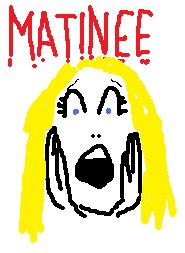 This review almost didn’t happen. Y’see, so rare is Matinee that I could find but two pictures of the DVD cover online and both were teeny tiny pixelations. Thus, I was forced to make my own abstract version, which represents nothing to do with the content of the film, but then neither did the existing cover art…

This seldom seen Canadian TV movie begins with an almost shot-for-shot rip off of Kevin Bacon’s murder in Friday the 13th, which turns out to be part of the movie ‘Murder Camp’ that a bunch of teens are watching at a small town horror festival. As the Kevin-imposter bites it on screen, so does some chick’s boyfriend – knife through the neck, exactly the same.

Two years later, the theatre is reopened for another festival, much to the townsfolk’s objections (well, the busybodies). New cop Al Jason is dragged into things when an arsey, mulleted teen dies in a suspect accident. Could the never-caught killer have returned? Elsewhere, projectionist Marilyn is worried about her daughter Sherri’s wayward boyfriend Lawrence, who becomes the prime suspect.

But there’s also sleazy reporter Geoff (Timothy Webber), Sherri’s absent father and horror producer, who has returned for the festival or campy hanger-around Warren, who may or may not be romantically involved with the theatre owner, Earle!

More talk than terror occurs and a few non-explicit murders punctuate the tedium, with some minor tension cranked once the killer turns out to be who we all thought it was and chases their last intended victim. Good casting, but whichever way you cut it, Matinee is for slasher and/or Canuck-completists only.

Blurbs-of-interest: Timothy Webber was Mo in Terror Train; Beatrice Boepple played Amanda Krueger in Elm Street 5; Stephen E. Miller was in The Stepfather and Funeral Home…as were the rest of the Canadian population.