“Everybody die not long time.” 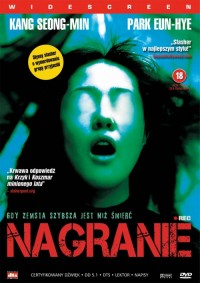 Two high school girls invite shy nerd Sung-mook to a wooded cabin one of their parents’ owns and the trio are attacked by three masked assailants armed with a knife and a camcorder. They beat the girls and set upon poor Sung-mook, eventually stabbing him to death on the bed and remove their masks to reveal themselves as the girls’ school friends, making a little horror flick with the intention of selling it (!). Stunned to realise that the knife they used wasn’t fake, the group panic and decide to burn and bury the corpse, only for Sung-mook to leap from his grave in flames and tumble over a cliff edge!

One year later, the gang find themselves stalked by a weirdo in an inconspicuous bright orange suit, who makes it clear he intends to level the score with them. Is it Sung-mook back from the dead? His creepy goth sister? A dressy Hollywood producer anxious to get his mits on the boys’ film? Good girl Hui-jung attempts to put together a plan to trap and unmask the killer before he gets to her first – though why isn’t clear as she wasn’t even involved in the prank.

There’s a fair amount of stalkery in Record: the killer somehow manages to taunt the group by feeding their tape into the TV broadcast at a road stop and skulks the corridors of their old school in the cat-and-mouse finale. Incoherent at best, some of the translations didn’t make total sense to me:

Maybe that’s it… He’s an orange kite from hell that flies up to avenge poor dead Sung-mook. Cooool…

Record is worth seeing not only for the train wreck that is its subtitles but also to see just how influential American culture and horror cliches are on Eastern horror before the whole situation flip reversed for Ring.

tagged with death on campus, J-horror, slasher, what the hell!?