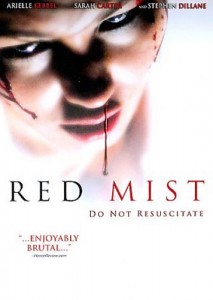 Dire-logue: “So, Kenneth is somehow taking over people’s bodies and killing us one at a time – have I got that right?”

When I picked Red Mist off the shelf and saw that it was “from the director of Shrooms” I almost involuntarily squawked “yuck!” and slammed it back from whence it came. However, due to this stupid penchant for slasher completism I have, I Lovefilmed it and it turned up just t’other day. The good news is that it’s way better than the tripe-fest that was Shrooms, although the director still has a thing for passing off British/Irish productions as American (accents n’ all…) but that’s alright, I can see why he’d do it. In fact, despite similarities to old 80’s horrors Out of the Body and Aenigma, Red Mist is pretty damn promising, it just kinda gets a few things wrong… Read on…

A group of uniformally popular and good looking interns at a hospital upset weirdo self-harmer Kenneth (also good looking considering his status), who confesses he has video footage of one of them pocketing drugs from the pharmacy for recreational purposes and their resolve is to ply him with booze and drugs, unknowingly inducing an epileptic fit that descends the lad into a coma, which they cover up by dumping the body outside ER and driving away. All but nice girl Catherine (Kebbel) exhale with relief when told of his condition and that, due to expired insurance and no relatives, his life support will be turned off soon. Guilt-ridden Catherine does some research and discovers an untested phase one drug that may help and doses Kenneth on it.

This is where things become ambitious but also a bit shit. Wonderdrug allows Kenneth to possess individuals and use them as his weaponry to kill the med students responsible: one girl gets her head slammed in a car door by the security guard while a sexy nurse force feeds nasty ringleader Sean with acid. Some of the other kills occur off screen while Catherine runs about trying to convince people of what’s going on until she herself is possessed and later wakes up in the woods unaware of what she might or might not have done…

Some sub-lot blurb about a selfish doctor trying to steal Catherine’s glory provides a little resistance come the end but by this time Red Mist has slid too far down its self inflicted slope and the contrived “it’s not done” ending, similar to that in Breathnach’s earlier film, is a groaner. It’d work better as a straight-up revenge slasher and only feels rushed in its present state, with many characters quickly dispensed with rather than given their due comeuppance for their early nastiness. A good try with a good cast and ideas but too little in terms of pay-off. 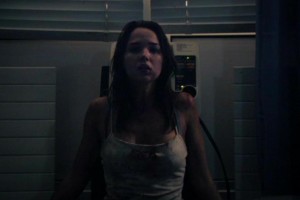 Blurbs-of-interest: Arielle Kebbel was in Reeker and The Grudge 2; Sarah Carter was in Final Destination 2; Katie McGrath was the lead in the TV show Slasher; MyAnna Buring was one of the potholers in The Descent.