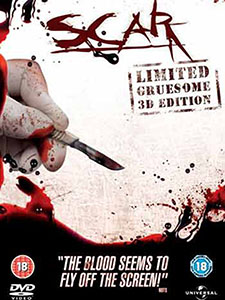 Dire-logue: “Hey altar boy! Come up here and take my virginity. I’m not graduating with it!”

Released in high-definition 3D for the cinema experience, on plain-old 2D DVD, is Scar up to much sans gimmick? In true Voorheesian mediocrity, it’s a yes and no affair.

Angela Bettis helps matters no end by virtue of the fact that she takes the lead as Joan Burrows, returning to her hometown of Ovid, Colorado (despite the film being Canadian) for the first time since 1991 when she and her best friend Susie were held captive and tortured by silver-tongued serial killer Bishop (Cotton), who plays a brutal game of slashing and maiming the girls in turn until one of them caves in and tells him to kill the other.

Through a series of flashbacks that occur throughout the film, we learn Joan eventually gave the order and managed to free herself and kill Bishop with a funky organ-sucking contraption used to embalm corpses. It’s one of those wicked “yeah, get the fucker!!” scenes. 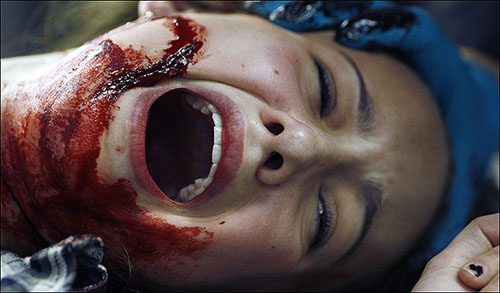 Back in the now, no sooner does Joan arrive back home (to stay with her cop brother and his soon-to-be-graduating niece, Olympia) then identikit murders begin, targeting Olympia’s gaggle of friends. Did Bishop somehow survive? Or is Joan so traumatised that it is she behind the madness?

Scar is like a slasher film in fast forward. Everything happens in no time at all with little complication. Things end in a similar fashion to how they began, with Joan bargaining for Olympia’s life. It’s a lot like W Delta Z (more commonly known as Waz) and the torture scenes are quite intense and grotesque. Inspite of male victims outnumbering females 5 to 3, most of the killings occur off screen and we only see pretty young girls being horribly tortured, which says a lot about the project. Also, the killer’s motivation, when eventually revealed, amounts to little more than “I like killing.” Deep.

Not an awful film by any standards, it’s nicely put together with its bleeding heart grossly splattered down its sleeve – it’s just forgettable and proof that grisly effects work, 3D or not, cannot compensate for an under written story and flat characters.