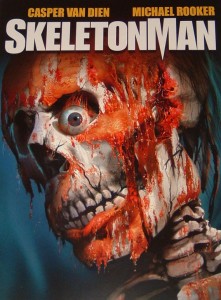 “Some myths are real.”

First-rate Fatality: boom-boom-boom like a hammer to the (explodey) head…

When somebody tells you that something has to be seen to be believed, they’re normally telling you about their trip to the Great Wall of China or some circus sideshow they saw… However, when somebody says this to you in reference to Skeleton Man, they’re not lying.

From Nu-Image, who normally make creature-features about spiders, octopods and crocodiles with imaginative titles like Spiders, Octopus and Crocodile - all of which had sequels, can you guess what they were called? Anyway, this knowledge on board, Skeleton Man is a bit of a departure for them. It’s a slasher flick, make no mistake about it, with some unexplained supernatural elements thrown in for good measure no real reason.

Some archaeologists dig up a skull and then a cloaked figure appears and murders them (plus a couple of more schmucks who get in the way). ‘Tis the skeleton man of course, and he manages to kill one guy by lifting him in the air… From there, some other guys are killed, army dudes, and a few weeks later a group of eight soldiers is sent to the region (which I thought was supposed to be South America but gradually looks more and more like a Californian national park). The group is led by Michael Rooker as the Cap and Casper Van Dien is also there but only says about eight words. He has a scar, ‘cos he’s like, y’know, “seasoned”. Four of the men are Delta Force and they’re joined by four women, all of whom we’re asked to believe are in the military but look like catalogue models and cry when they find dead bodies. 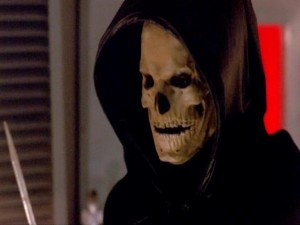 Through the medium of flashback part I, we learn what happened to the previous team, they met the Skeleton Man, and the body count reaches double figures within fifteen minutes. The group then stumble upon a blind Indian who uses flashback part II to explain that the killer once killed loads of tribal folk and is called ‘Cotton Mouth Joe’ – almost like the song. Almost. The skeleton man appears, usually on horseback, through weird little CG vortexes (that everybody sees but nobody mentions) and begins chopping and skewering the soldier dudes and dudettes, brings down a chopper with a bow and arrow and appears impervious to bullets, which doesn’t put any of the team off wasting their rounds.

Eventually, skeleton man goes to a chemical plant to kill more people, sending the body count soaring to nearly forty by the time Rooker explodifies the joint. But who is skeleton man? Where did he come from? Why does Casper Van Dien commandeer that truck? Why does it explode for no reason? How come it stops for him to leap out but is still rolling along in the next shot, huh? Well, you’ll never find out, never! It’s like cheap wine, it gets you drunk and you giggle, but you never want to see or hear from it ever again.

Blurb-of-interest: Casper appeared in Tim Burton’s sort-of slasher Sleepy Hollow; Rooker was in The Dark Half.

tagged with slasher, slasher films that aren't supposed to be funny but are funny, what the hell!?, who finances this crap!?