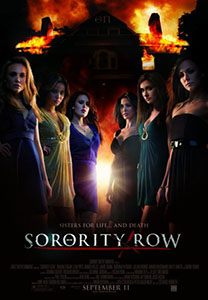 Dire-logue: “You make being a bitch an art form.”

My celebrated 500th slasher flick! Yay or nay? Perhaps a dash of both.

The dreaded R word crops up again in a case of yet another early 80’s pseudo-cult-classic being – ugh, I even hate typing it – “re-imagined”, “re-tooled”, or whatever the hell you want to call it. Actually, I’m not so fazed by them, anything that draws attention to the (usually) superior originals is positive. 1982’s House On Sorority Row is a fairly elusive member of the slasher alumni, one directed with both care and flair by Mark Rosman (who signs on as Exec Producer here), it was another of the moral-dilemma slasher pics from the era, or as everyone on the internet seems to think of them now, films in the I Know What You Did Last Summer mould. ‘Tis true that many-a-film have featured the not-so-secret secret characteristic at their core and it’s a form I quite like, opening up lots of potential for realistic characters and their respective reactions that give us good insight into their persona.

Sorority Row, as it’s now called, is a remake only in that it follows this same basic guideline. The girls of the Theta Pi Sorority are out to teach Megan’s straying boyfriend Garrett a lesson and trick him into thinking she’s died after he slipped her a few roofies given to him by substance-abusing big sis Chugs. President Jessica takes Garrett, supposedly dead Megan, and four other girls away from the house on the promise of taking her to hospital when they take a ‘wrong turn’ and end up at an old mine where a freaked-out Garrett impales her with a tire iron after they discuss the best means to ensure the body doesn’t float. 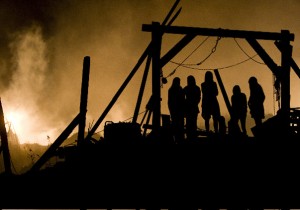 With a real body at their feet, the girls (and boy) bicker over what to do. Fortuitously, there is no cell phone reception and a nearby deep mine shaft. Only nominal nice girl Cassidy makes a real case for going to the cops but is out-voted, while nervy smart girl Ellie (we know she’s smart because she’s shy and wears oversized specs) is too broken up to have a say. Jessica convinces them to toss the body down the mine and forget about it. However, it’s nice that, for once, it’s mentioned that they will have to life with the dreadful secret for the rest of their lives.

Eight months later, the girls graduate and prepare to vacate Theta Pi to the tune of a hooj see-ya-later party. Spirits are soon lowered by the arrival of text messages that show the now ‘pimped-up’ tire iron in someone’s grasp. It’s a hell of a lot sharper… The girls assume Garrett is behind it and distract themselves with preparing for their party while a cloaked maniac begins a merry quest to set right their wrong. Could it be Megan’s sister, who’s just turned up out of the blue and wants to pledge? One of the girls themselves, wrecked by guilt? Megan risen from the grave? 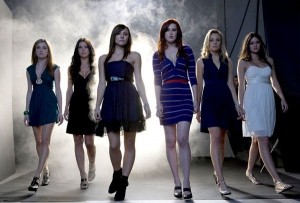 After a few introductory murders, which are not limited to those involved in the prank, the killer baits the remaining girls with further text threats until only they and a sprinkling of others remain at the sorority house, post-party for the home run. It’s this final third where Sorority Row starts to sink under its own weight. The mystery element, up until now, has been engaging, the murders fun without being too grisly and Jessica’s never ending witty retorts and lack of sympathy for anybody else have been continually amusing. There are a few totally unsubtle changes, Carrie Fisher going all Ma Barker with a shotgun and a bizarrely realised threat in the form of another party ‘in the know’ who may or may not be the killer…

Memories of the ill-conceived Black Christmas remake flood back towards the end, which also takes a stroll down Slumber Party Massacre lane towards the flat climax and a not-so-clear “twist” prit-sticked on to the very end. It’s a shame as things were going so well up until the regrouping at the mine, where it becomes clear that perhaps Sorority Row isn’t the straight-faced slasher flick it looked like it was going to be. Case in point: there are certain characters we want to die with an added dose of cruelty because of their abhorrent nature, instead, said individuals are done away with far too quickly and…comically? What’s that about? Where’s the long, harrowing chase before the fatal blow? There are a few too many gags once the killer is unmasked, their exposition pretty feeble and unconvincing – but when did these guys ever play with a full deck, eh?

Ultimately a confusing one, not least because of mixed intentions, but enough merit to engage for the running time, well written dialogue (although most of it belongs to something like Jawbreaker) and a cast of semi-familiar faces to horror fans, plus a good central figure in Evigan’s take on Cassidy and Pipes is great as super-bitch Jessica. Sorority Row is one of those films that probably needs a twice-over to make sure you totally understood where it was taking you. It graduates, but sadly without honours. 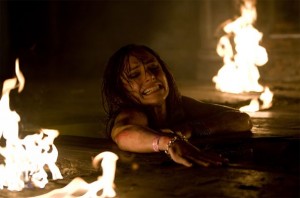 Blurbs-of-interest: Leah Pipes was the heroine in Fingerprints; as was Margo Harshman in Simon Says. Julian Morris was in Cry_Wolf. Carrie Fisher had a cameo in Scream 3.