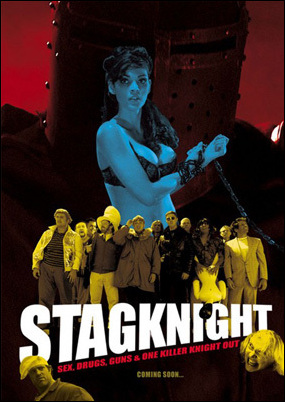 “Sex, drugs, guns and one killer knight out…”

First-rate Fatality: Sword through the mouth and out the arse! Ouch.

Recently, I had the disctinct displeasure of watching a Brit-slasher flick called Small Town Folk. It was a vignette stretched to feature length that required a stretch of patience to get through it. So, when sitting down to watch StagKnight last night I had similar reservations.

Blissfully, StagKnight looks like Halloween by comparison. Evidently shot with next to no budget in place, financial constraints are compensated for by a quirky sense of humour and a central premise so very simple it’s a wonder nobody has ever tackled  it in horror before now. 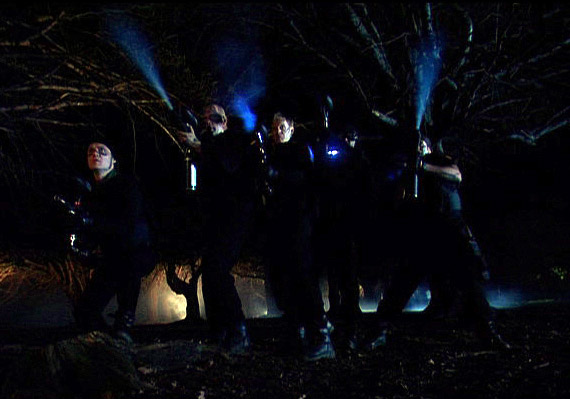 Dorky historian Brian’s stag night with the Weekend Warriors’ paintball team is taking place around the back of nowhere at an inn owned by sub-wiccan Fay (Dickinson) and her Egor-like son William (ex-rugby giant Bayfield). She tricks the group into performing a chant that resurrects a Templar Knight and subsequently opens up access to a cauldron of eternal life-serum or some such twaddle. It’s never made clear really. But we’re strictly here for the slashing…

After they’re bored of the strippers and pranks, the guys opt for a nightgame of Paintball and split into two teams to enter the woods where, of course, our Templar Knight is waiting with his big sword. Meanwhile, reluctant stripper Blossom is cast early into the nightmare when she and the crazy driver crash into the Knight’s tomb and she escapes wearing an important artefact that will assist in Fay’s plan to get to the cauldron.

The Knight soon begins taking out the players in a variety of ways until the inevitable showdown in the tomb. Victims are impaled, skewered, have their faces punched to oblivion and choked on paintballs. It’s impressive but the dim lighting and CG-mist makes things difficult to see from time to time and we never get a really good look at the Knight himself. 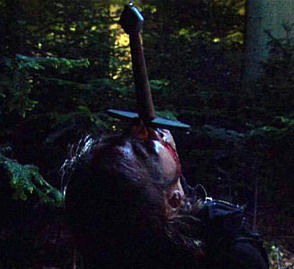 Bayfield and Dickinson are good, as is Willis as Brian and James Hillier as the sleazy exec-type. The crowded background cast have less to do with their one-note roles, including Korean guy, American guy, comedy Indian guy and camp gay bloke, but serve their purpose as Knight-fodder well enough for it not to matter. With a larger wad of cash at its disposal, StagKnight could have been on a par with Shaun of the Dead and is currently in limbo awaiting a DVD release. At least it never tempts you to hit fast forward which is more than can be said for a lot of contemporary horror comedies. A fun little timewaster and maybe a predecessor to HenKnight with a gun-toting bride?