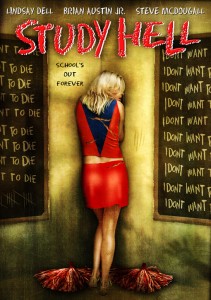 Dire-logue: “The cool kids look at me as a geek, the geeks kinda see me as too mainstream, so I’m stuck in the middle.”

Everyone should love The Breakfast Club, it’s the essential brat-pack flick. Molly Ringwald’s in it for frack’s sake! I’m sure some who saw it back in the day wished the cast would bite it Jason-style. Well, their wishes have been answered and they only had to wait 20 years!

OK I’m lying. Sort of. Molly Ringwald did do a slasher film though. So did Judd Nelson. And Ally Sheedy had already been in Deadly Lessons a couple of years earlier. Instead of these has-beens starlets of the past, we’re given five ‘updated’ versions of them. The likenesses are uncanny as you can see from the trailer…

But wait a minute…this isn’t Shermer, Illinois… What’s with their accents? They’re saying ‘abowt’ and ‘ay?’ Are they- are they Canadian? Actually it’s about the only memorable thing here, I like the Canadian twang; it’s a nice combo of American and Australian soundages, ask my Vancouverianian friend August.

Anyway, with detention in full swing and the same assignment handed out by dorky looking teech Mr Keller, ’tis he who rapidly descends into madness and decides the wayward students must DIE! DIE! DIE! We want this too, as they’re very annoying and cannot act very well.

There’s a rubbish explanation courtesy of the janitor (who ain’t no John Kapelos!) to do with ‘Nam and murdered cheerleaders. The athlete, princess, geek and ‘criminal’ (yes, he’s the bespectacled one) all bite it, leaving the Sheedy-clone to face off with the killer. Some weird-ass twist is sellotaped on to the end, which, when added to the rubbish FX work, divided by the sub-drama class acting, multiplied to the power of shit equals one waste of the six or so hours it took me to stream this flick. And I was sick that day. And I missed  Murder She Wrote to watch it. Boo@Study Hell.

Singular blurb-of-interest-that-should-be-taken-as-a-heeding: many of the cast and crew also produced Dark Fields, which couldn’t possibly suck as hard as this…could it?

tagged with Canuck, death on campus, get your own ideas!, slasher, who finances this crap!?