Chucky in no way endorses this product 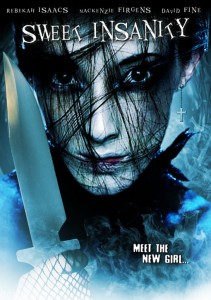 A.k.a. Stranger: A Soulmate of Chucky

Bargain basement video sludge with high-schooler Stacey’s parents off on vacation for the weekend, allowing a gaggle of her friends to stop by, drink beer, and get stabbed, slashed and pick-axed by a shadowy killer, who looks most likely to be either Stacey’s weird neighbour – a shamed cop who shot a kid – or is it her new gal-pal Christina, a goth chick whom only Stacey seems to be able to see…?

Bizarrely, the UK DVD for this film is titled Stranger: A Soulmate of Chucky! Look, there’s even a creepy doll on the cover… 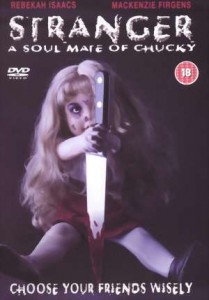 Is there a murderous doll in the film? No. Is there a creepy doll in the background? No. Does anyone mention dolls in any way, shape or form? No. This title shall forever remain a mystery, methinks.

Anyway, the ending is kind of Haute Tension-esque by way of Identity, and may require a second look to cement what the writer’s are proposing here and also because the sound is so bad the dialogue is often inaudible. A laughable film with maybe a semi-interesting idea and a decent powertool murder as all there is to recommend it. Well, not recommend… Another word that means sort of the same thing without committing myself to being responsible when you go and rent it. I stand by my one-star!

tagged with get your own ideas!, Nu-di-ty, slasher, who finances this crap!?