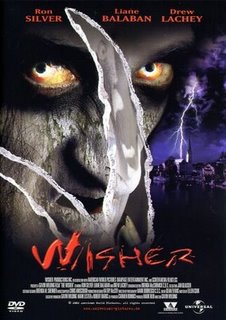 “Cut to your worst nightmare.”

Mary is a high-schooler obsessed with horror movies and often wakes up outside the front of her house after a nightmare – the best of which opens the film and involves a birthday cake with a rather gory filling. Mmmm.

Her shrink (Silver) blames horror films, as does her Dad. Forbidden from seeing another scary movie by her Pop, Mary sneaks out to see The Wisher – a budget slasher flick that has been at the top of the box office for weeks (check out the cinema where it’s playing on several screens whilst Halloween: Resurrection is only on one!) and is rumoured to be the grisliest horror flick going. After chucking up dinner at the movie, Mary’s life is worsened when her dad is killed in a car accident on his way to pull her out of the theater. We know it’s a bit more suss than ‘just a car crash’ though, don’t we, eh?

Nobody believes the guilt-ridden teen when she says there’s someone following her, someone made-up like the film’s titular character, granting her wishes in a twisted way, e.g. Mary wants her friend to shut up and the chick’s tongue is cut out by the maniac, who wears Freddy-like gloves with shards of glass on the fingertips.

Good concept, but the film plods on without enough stab and drip and by the end only two characters are dead, and the killer unsuccessfullygoes after Mary and her friends before sa so-called ‘twist’ right out of the equally rubbish Wishmaster comes into play and saves the day. The heroine has supposedly seen everything going in the horror realm, yet she falls for the oldest cliches in the book and can’t figure out who the killer is. Especially dumb as the perp virtually wears a T-shirt with ‘I Am the Killer! Ask Me How!’ printed on it.

The film wins a few bonus points for poking fun at the whole ‘violence in cinema’ issue with hardly a drop of subtlety, it’s too bad the screenwriter didn’t devote as much enthusiasm in knocking off some of the annoying cas members and making it more decisively a stalk n’ slash opus. Cool tagline though.


tagged with slasher, weird-ass twist, who finances this crap!?