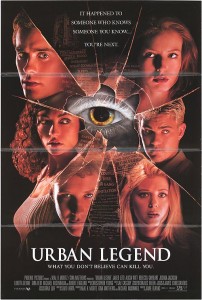 “Just because it didn’t happen, doesn’t mean it can’t.”

Dire-logue: “It’s like someone out there’s taking all these stories and making them reality.”

Urban Legend, how do I love thee? Let me count the ways… Damn, there are too many, I’ll just type it all out.

February 2009 will mark the ten year anniversary of my first of six cinema viewings of UL, my hands-down favourite ‘post modern’ slasher pic. You don’t read a lot of praise for this little gem; it’s often cited as being nowt more than a second-rate Scream wannabe. While it’s undeniably in heavy debt to that film, UL goes to all the places I wanted Scream to go to but didn’t. Like what, you say?

Well, it starts with, like, the coolest murder set-up. Natasha Gregson Wagner (what happened to her?) is driving along a lonely stretch of highway when she runs outta gas. She pulls up in this dank little filling station where a stammering Brad Dourif entices her out of her SUV and attacks her. Or does he? Tasha gets away and speeds off, leaving Brad’s call of “someone’s in the backseat!” to be swallowed by the wind. Half a click down the road, a shady figure emerges from said backseat and swipes of her head with a funky axe!

Yes, it’s a slasher film about those stories, the ones you tell around campfires, in the school playground or when you’re slacking off work and want to talk about something other than the X Factor. Conveniently, the group of college kids at the centre of the ensuing terror are taking a class in urban legends, taught at Pendleton University by Robert Englund, which should be enough to make anyone think twice about signing up… 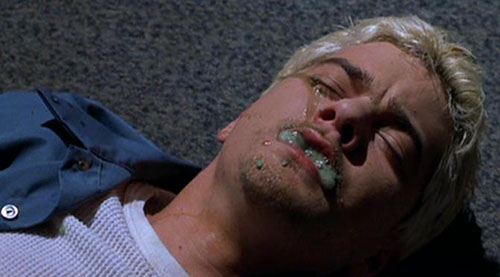 We meet our teens-of-terror. There’s campus journo-wannabe Paul (Leto), who’s super-ambitious. Ambitious enough to commit murder though? He’s our Gale Weathers stand-in. Brenda’s got the hots for Paul and says a lot of neo-bimbo things to get his attention. Damon (Jackson) is the peroxidified-prankster who’ll do anything for a gag or a shag… Parker and Sasha are the oversexed couple; he’s an aging frat boy and she runs a call-in radio show about sex things. Then there’s Natalie, our final girl elect, played by the fab ginger princess who is Alicia Witt. Natalie is conscientious and smart, she can look after herself and she’s an unconventional heroine, none of this ‘woe is me’ crap…although she does have a few secrets that might be relevant… 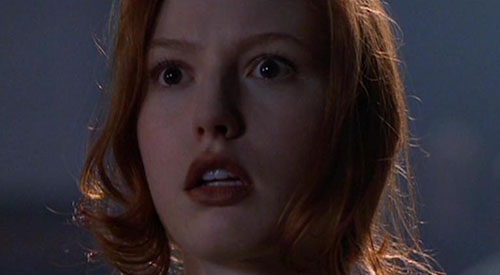 The murders continue with good pace, each of them revolving around Natalie in some way: her date, her goth roommate (Danielle Harris – nice to see her ten years on from Halloweens 4 & 5). Natalie is the only one to suspect that the Parka-coated killer is twisting urban legends into the murders, but everyone she goes to with her suspicions thinks up a reason to disuade her: suicide, prank, suspect already in custody yaddah yaddah…

Even Pam Grier-loving campus cop Reese (Loretta Devine, our Dewey stand-in) is sceptical… What’s a girl to do? Natalie part-convinces Paul to look into it, as it appears that the University’s own campus legend about a dorm massacre a quarter of a century earlier may also be more than just a myth… 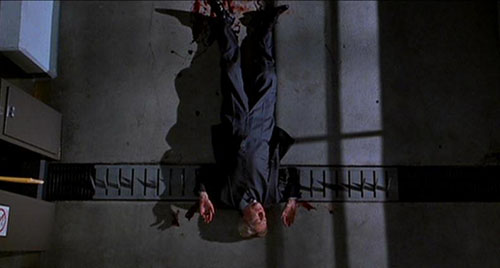 Grisly murders continue, all of them satisfying in their creativity without being excessively grotesque… There’s the psycho-under-the-car one, the Pop Rocks and soda one, another about flashing your headlights to cars driving around without theirs on and the wet dog in the microwave thing… 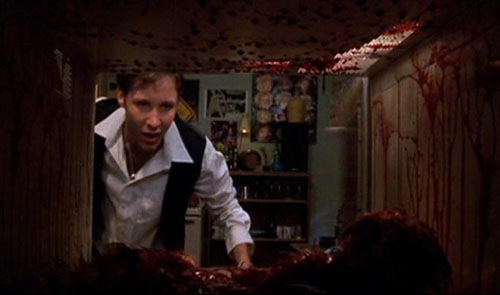 Answers start to unfold eventually as Natalie confides her guilty secret to Brenda, that she knew the first victim and that they’d done something bad a few years earlier. Wouldn’t it just be so convenient if the reason that Natalie is always around for each killing is that it’s something to do with the ‘accident’ she was involved in? Hmm…time to assemble Fred, Daphne and Velma. 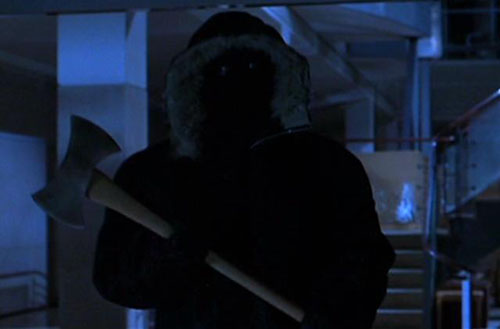 In the final third, Blanks ups the ante on cliches-what-work. Now, most people moan and whinge about cliches, but that’s why we love these films, right? We’d be upset if the slutty girl didn’t die. Parker’s fraternity throws a costume party to commemorate the is-it-or-isn’t-it-true campus legend and Parka-man comes with an axe to grind. There’s a great chase scene when Sasha finally comes face to face with the killer with some nifty mini-stunts and great near misses, akin to the film’s production cuz I Know What You Did Last Summer, where Sarah Michelle Gellar – who incidentally was the first choice to play Sasha! – was accosted to the death by the psycho fisherman. It’s a great scene, let down like its contemporary by refusing to show the kill, but all is forgiven because everything’s so much fun! 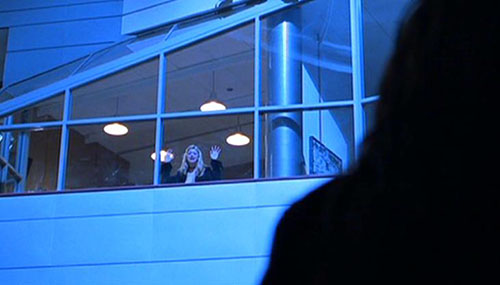 Action moves into the woods for a short while so that Natalie can discover a few things, cross a few suspects from her list, all the time jockeyed into position by a luckier-than-lucky killer, who’s surely got psychic abilities to be able to turn up in the right place at the right time every time!

We’re dragged back to campus for the finale, at which point the killer’s identity is revealed and this is the part where most people who didn’t like the film probably groaned aloud. Yes, it’s stupid and campy. No, the assailant probably couldn’t have possibly done most of the things they did. My God, that motive is cheesy! But hey, hell hath no fury, right? And that should spell out who it is if nothing else does! 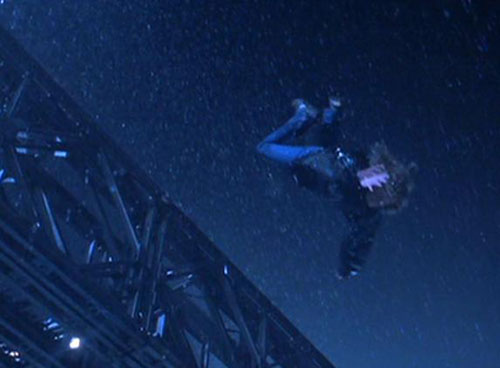 Ugly Betty scribe Horta adds enough humour to offset all the slashin’ and killin’, while Aussie helmer Blanks makes the best of the ultra-pristine university setting, even if he has too strong a penchant for strobe work and jump-cuts. It wouldn’t be easy to make a film like Urban Legend work; stringing together separate stories and making them all connect to the same group of people, perpetrated by one person is neo-impossible, hence the abject ridiculousness of it all.

I love the outcome, I love the killer’s soliliquy and I love the production quality. As it functions as a mystery, most people make their final judgement based on how satisfying the answers to their questions are. Somebody told me who the killer was before I saw the film so I was not let down by anything, if anything it set things up to make a majorly positive impression because it checked all my favourite boxes. Most of these things are down to the choice of Witt as Natalie, who wields a great scream, convinces as a college girl and makes the best face ever when it comes to facing off with the killer… 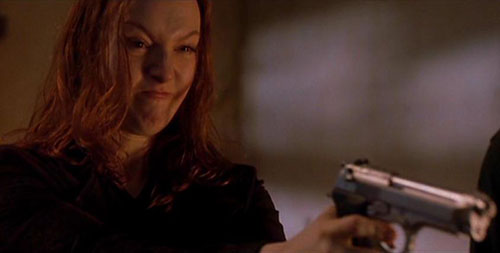 Love. It. I want an ‘I Heart Urban Legend‘ T-shirt. I’d wear it with pride alongside my Voorhees hockey top and Camp Crystal Lake Counselor shirt. The world might well be a better place if we all loved Urban Legend. No, really, it might!

Blurbs-of-interest: Loretta Devine was the only cast member to return for the largely-unrelated sequel, Final Cut. Gayheart and Jackson both make small appearances in Scream 2 and she was also in Santa’s Slay; Danielle Harris later turned up in Rob Zombie’s Halloween and its sequel and also Hatchet II, Blood Night, ChromeSkull: Laid to Rest 2, and Victor Crowley; Julian Richings (the creepy caretaker) was Three-Finger in Wrong Turn, and of course Englund and Dourif turn up all over the place in cameos and stuff. Jamie Blanks turned out Valentine three years later to even less positive reviews and a couple of other horror films more recently.

tagged with death on campus, slasher, spunky final girl, suck it, yo! Hollywood