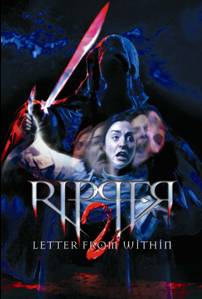 RIPPER 2: LETTERS FROM WITHIN

“Back from the grave to redeem his soul.”

The 2001 Anglo-Canadianian original was a neat little knock-off of Urban Legend with a confusing ending that sort of nodded in the direction of a possible sequel, which resulted in this dismal British feature, the quality of which is alluded to by virtue of the fact it’s never been released in the UK in any way, shape or form to date.

This hackneyed marriage of ideas from A Nightmare on Elm Street 3 and the left over jetsam from the previous film sees Molly Keller (now played by Karpluk) in an institution following the intangible twist ending(s) from the first round. Her shrink recommends her for a trip to a specialist clinic near Prague where Egor-like doc Bremmer carries out questionable treatments on a group of troubled youths by exploring their subconscious while they sleep – how or why he does this is something we’re apparently not meant to ask about.

Molly’s schizoid brain transmits a cloaked fiend – possibly Jack the Ripper, who we’re told is an ancestor of hers – into the groups’ collective dozing and he begins doing away with them one after the other while they roam about in their fantasies / nightmares.

Even with two directors and four scribes, the creative team fail to even muster the most basic of chills given the gothic castle setting and while away the running time with endless ‘dream’ sequences, including some sexual deviant ambling around a fetish club, serving no purpose other than to visualise soft-core lesbianism and an excess of tits.

Otherwise, criminally undeveloped sub-characters are blandly killed off before Molly confronts the dream stalker (though not before aping Jennifer Love Hewitt’s “what are you waiting for?” moment from I Know What You Did Last Summer) and the film ends as confusingly as the first one did, with absolutely no confirmation of who did what or if any of it happened at all to a group of people who might not have even existed.

Nothing but a mass of empty shells and no gun powder, Ripper 2 is the equivalent of Root Canal Surgery: The Musical, starring Justin Beiber.

Blurb-of-interest: Lloyd Simandl had already directed the even worse Possession: Until Death Do You Part back in 1987; Erin Karpluk later had a role in the TV series Slasher.

tagged with Euro-horror, get your own ideas!, I want to die, Nu-di-ty, rip-off central, Rule Brittania!, sequel city, slasher, spoilers, weird-ass twist, what the hell!?, who finances this crap!?