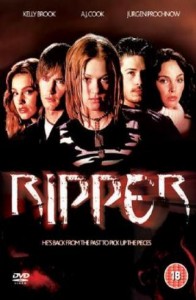 Dire-logue: “For the second time in a few years, people are being murdered around you and you don’t think there’s a connection?”

Looking at the DVD cover for Ripper, it’s plain to see where it’s got some of its ideas from. That old triangle formation of pretty cast members up for the chop from another merciless killer. Mwa-ha-ha-haaaa…

Brit Director Eyres gave us the pitiful Goodnight, God Bless back in ’87 but his eye for what makes a decent body count flick has doubtlessly improved in the 14 year gap between that tripe and this impressive looking Canadian export, which owes as much to Urban Legend as it does to the story of Jack the Ripper.

We begin with a blonde girl running through the rain, finding her friends dead – nailed to trees; covered in a mountain of soil (!?) – and watch her swim to a nearby yacht where more bodies are found and one unlucky gal gets sucked into the propeller (pictured). Ouch. 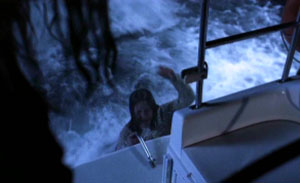 Blonde girl – Molly – ultimately survives and we leap five years into the future and rejoin her, now a red-head and full of attitude, at a college where she is studying criminology under Professor Marshall Kane (Bruce Payne), currently learning about serial killers. During a lecture we get to the meet the meat in the form of Molly’s student colleagues. There’s prissy French girl Chantelle, wannabe-lothario Eddie, stuttering, frowny Aaron, and a few less interesting ones. Then there’s Kelly Brook as the (who knew) oversexed chick with in a short skirt, Marisa.

At a costume party-slash-rave in some delapidated city building, Marisa is chased and murdered before being flung through a window for all to see. Eyres makes the most of this debut murder (excluding the stuff at the beginning), as it occurs quite some way into the film. Marisa is first suspended upside down out of a window several stories from the ground and then hoisted back in by the killer who proceeds to knife her to death while her blood drips on to a starlet dancing on the floor below. We also get a few of those cool screaming-face-reflected-in-the-blade shots. 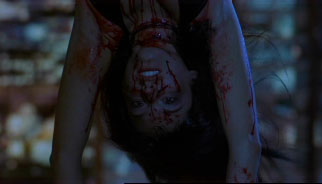 Back at school, everyone’s talking about what happened at the party. Which is to be expected, I suppose. Some of the students in Molly’s study group want to investigate on their own despite her preference to steer clear. It’s already been established that Molly is a bit of a cow. She’s pretty damn aggressive, doing a goth-chick thing that slowly dissipates over the course of the film. Her attitude is one of Ripper‘s shortcomings, evidently an attempt to give things a ‘gritty’ feel by having her wear dogtags and reside in a graffiti-walled shithole. One must wonder what she’s doing at such a pompous university with all her inoffensive, pastel-wearing classmates. A.J. Cook later played the psychic girl who predicted the freeway crash in Final Destination 2, so we know she can be a nice girl too.

When another of the group is murdered in a stylish road-rage manner, Molly connects the dots and puts it to the Professor (and the class and Jurgen Prochnow’s apple-chomping detective) that the killer is copying Jack the Ripper’s M.O., right down to the number and location of stab and slash wounds on the victims. 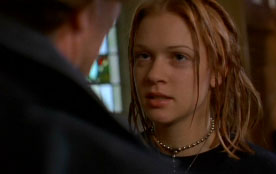 Stupidness soon ensues after a third murder (coupled with some weird hallucinations) and the remaining four teens feel it’s wise to go, with the Professor, to his cabin in the middle of the woods where there is no phone reception or shortage of cutting implements to hand. It must be noted at this point nobody has proposed why their particular study group is being targeted…

The inevitable soon unravels and nasty ends await Eddie, Chantelle and Aaron (who has followed them). The latter two endure falling into a logging conveyor which drags them into enough deadly saw blades to make Leatherface squeamish. So it’s between Molly, her love interest Jason and Professor Kane. Having worked out that the initials of the group correspond to those of the Ripper victims, they’re all concerned that they may be next. 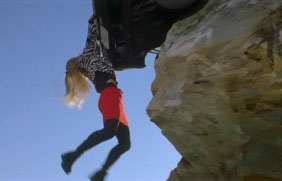 Ripper suddenly stalls once the remaining characters enter the rain-soaked woods. The identity of the killer – and whoever slaughtered Molly’s friends five years before – is revealed, and then unrevealed, and then sort of revealed again. In short, there are maybe three twists that overlap in the last few minutes, each negating the previous one. According to the commentary, Eyres didn’t get the end he wanted, so it’s debatable whether the close we’re left with is a comment on The Ripper’s true identity, something that will remain cloaked in mystery forever.

Ultimately Ripper is a handsome, engaging film that sadly loses its way in the last ten minutes. It runs too long and takes itself too seriously but is leagues ahead of the usual straight-to-DVD shelf filler in terms of its production values and core ideas alone. The gore is plentiful and, watching it yesterday, I noticed for the first time a fleeting shot of the poor sod’s head meeting with the saw blades during the gruesome logging mill scene. I wasn’t keen on all the violence against women stuff that came through good n’ strong, it’s something I still find a bit uncomfortable, not helped in this case by one of the least likeable final girl’s going. There’s also the killer’s copy-the-killer schtick that Molly latches on to – did Jack the Ripper use a jeep to mow down any of the Whitechapel hookers? Hmm… Not sure he had access to a saw mill either. It’s a slightly pretentious, wannabe slasher par intelligentsia, followed by a really rubbish sequel a couple of years later. 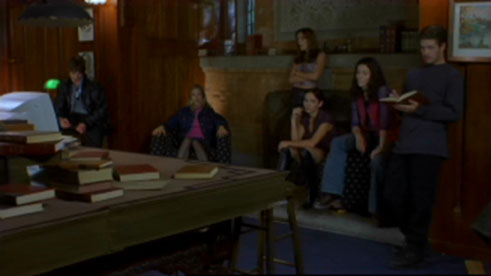 Blurbs-of-interest: Three of the actresses – Cook, Vaugier and Evangellista – appeared in various Wishmaster sequels. Vaugier crops up in The Fear: Resurrection too. Chantelle’s accent is actually real, contrary to what some IMDb critics assumed. Derek Hamilton was in Taboo. If you’re feeling masochistic, check out the more-or-less unrelated sequel.