Times may have changed, but people still make rubbish films. Rubbish slasher films included! “No way,” you say, “Way!” I correct you. Then we fight over it some. 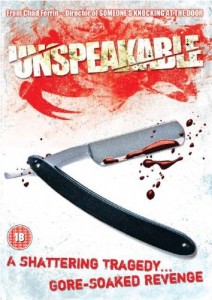 Dire-logue: “That is MY pussy! Oh look it’s all dirty and full of shit – that’s mine!” 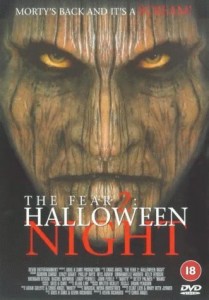 Dire-logue: “Everything is about getting laid.”

The first Fear movie involved a bunch of talky college kids doing an experiment in fear. Predictably, they all fall victim to their own most dreaded phobias – helped along by a mysterious wooden mannequin known as Morty. It was all supernatural hooey and not very good.

This Scream-influenced follow up revives the wooden one but doesn’t do any better. This time, Gordon Currie (seen impaled on an aerial in Friday the 13th Part VIII a decade earlier) goes to visit his grandparents (Pennell and frickin’ Betsy Palmer, y’all!!) with some friends for a party that will involve some stupid ritual to rid them of their worst fears.

Morty, now a sacred Indian thing that the token Native American character (who is notably the first one done away with) harps on about, is soon possessed by the spirit of a dead serial killer who made his victims tell him their worst fears and just happens to be Currie’s daddy!

What ensues is the slaughter of the only interesting characters, while the boring and morally distorted ones survive – and never appear to be that bothered by finding their dead friends, even managing to make time for sex amidst the unfolding carnage!

A total lack of interest in anyone (the awesome Palmer aside) and a supremely annoying heroine (fittingly named Peg) make this as lively as any other wooden mannequin. 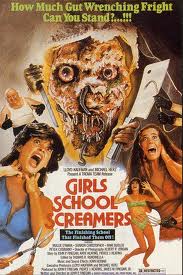 “The finishing school that finished them off!”

How many excuses can be found to send a group of teenagers to another scary house with “a past”? So far, Girls School Screamers wins the award for worst ever reason: Inventory.

Things begin quite promisingly with a Ghost Story-like bride scaring the shit out of a daring brat who ventures into the abandoned Welles Manor. Sadly, once the mansion is inherited by a Trinity School for Girls and they send seven “exemplary” students and a REALLY old nun (amusingly named Sister Urban. Sista Urban would be better) to take inventory of the possessions that remain.

Moral centre Jackie discovers a portrait of the niece of the owner of the house, which happens to look exactly like her. Her dumb friends soon start dropping like flies – as do a couple of boys who drop by to scare them – and are later arranged in a mock-wedding set up in the basement. Then Jackie is possessed by the ghost of her look-alike (the bride from the start) and pokes the killer’s eyes out.

Sadly, there’s no fat hairy bloke with boxing gloves as seen on the cover, but we DO get one chick fried alive but when seen later at the wedding, her skin is back to normal colour.

One note of interest is that GSS is one of the VERY rare occasions in 80s slasher movies that more than one teenage girl survives. As does Sista Urban. Doesn’t matter though, by that point you’ll likely be so confused by all the plot holes you won’t even notice. 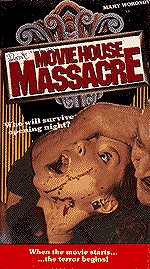 Dire-logue: “Is it a new requirement to have an IQ over 50 to work here?”

According to the sleeve, “this quirky story has all the elements of a John Waters film”. How John Waters would react to such a declaration after seeing the damn thing might make a more interesting read because this is an almost stunningly dreadful film with awful acting, set pieces, no apparent story and a horrible plinky-plonky score.

Spotlite Theaters purchase an old movie house where a fire killed twenty-odd people and the ticket booth operator was stabbed to death by the usher. The sleazy manager dispatches three of his staff to fix up the place where skeletal heroine Jennifer runs into the tux-wearing spirit of the (now geriatric) killer-usher, who knocks off some random cheerleaders who stop by and the rest of the mostly female staff roster.

Woronov has a thankless role as the bitchy manager’s assistant, but her presence is paled into blandness by the two girls who are transferred to the haunted locale after one of them starts a huge fight during a movie (but isn’t fired!?). They wear the most ghastly array of clothes: a pink mini-skirt over purple leggins with black heel boots. Yuck. The badly-behaved one, Selena, is one of the few interesting elements: “I am the main feature!” she squawks during the brawl she incites.

Despite the acid-to-the-eyeball fashion faux pas on display, there are a few laughs to be had and one surprisingly good effect where a phone crumbles into much in Woronov’s hand. But the bad clothes, repeated shots of a vacuum cleaner (!?), the crappest cheerleading troupe ever to grace the screen, a victim dying from sliding down a wall (!? again), this should come with a warning rather than a rating. 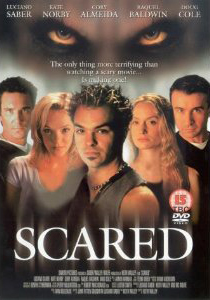 “The only thing more terrifying than watching a scary movie is making one.”

A slasher hacks up the dopey cast and crew of a dopey slasher film (here, titled Death Blade), but with even less appeal than the least inspired moments in Cut, Scream 3 or Urban Legends: Final Cut (all comparative masterpieces).

Stroppy extra Samantha is hired by the film’s writer and director (though the producer doesn’t seem to get a say…) when the lead actress is stabbed in the gut and the stuntman-cum-killer is found with this throat slashed. She also lands a supporting role for her annoying valley-girl bud Heather.

Despite the double murder – and a subsequent third – neither cast nor crew choose to put the project on hold or bail altogether because what they have is “the next Scream“. If they were referring to plagiarism then that would be a very astute observation indeed. This choppy flick swipes reels of used material and recycles it to dreadful effect: the opening scene manages to combine the overused Drew Barrymore set-up with the climactic twist from Valentine.

The remaining characters somehow figure out that there are two killers at work but don’t tell the cops because they think they can bring them to justice first, using a plan seen on an episode of Scooby Doo. Seriously.

Most of the murders occur off screen and several other people vanish from the story altogether, without being heard from again, and when the killers are finally unmasked to the surprise of nobody bar Samantha, it serves only to rub salt into the gaping plot wounds this waste of shelf space has brought upon itself.

tagged with get your own ideas!, Nu-di-ty, Scream, sequel city, slasher, the 80s, weird-ass twist, what the hell!?, who finances this crap!?