…And no screencaps either, God damn it! They suck, so adding what I believe to be ‘good shots’ from any of them might only pique your interest. And then you’ll go and watch them, realise I was right all along and come back yelling at me.

We’re going in order of what I think looks best. 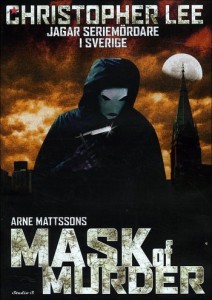 “Who is innocent… Who is guilty… Who is safe… Who is next…?”

Lee reportedly turned down the role of Doc Loomis in Halloween and was perhaps therefore under the illusion that taking a clone of that role for this Scando-Canadian production might bathe that wound. How they sucked Taylor in is a mystery. Maybe Lee brought him in. Maybe Lee was already stuck like his legs were in a combine harvester and he held on to Taylor until both were dragged to their deaths career nadirs.

They and Sam Cook are cops in a small Canadian town where a loon in a shitty cotton mask is slicing the throats of young women. They find him and shoot him dead but only a few days later copycat killings begin – but whoooo could it beeeee?

Trouble is, MoM can’t make up its mind over being a slasher film or a cop film. The victims are presented as non-speaking plebs or women who ‘had it coming’ and there’s no heroine to speak of, no chase scenes, nada. We do get to see some frontal male nudity (gasp!) and there’s a boring subplot about an affair going on between one of the cops and the wife of the other one who isn’t Christopher Lee, because he’s in hospital for most of it.

The obnoxious twist ending is smug as can be but it doesn’t elevate this above being a bad combo meal of seasoned professionals surrounded by rank amateurs that has the audacity to rip off the far superior He Knows You’re Alone.

Blurbs-of-shame: Lee was in Sleepy Hollow and the even worse Funny Man. 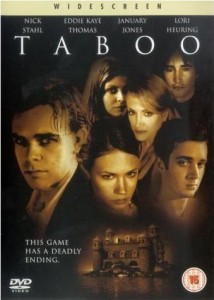 Six egotistical Cruel Intentions-type college brats gather at a remote mansion on New Year’s Eve where they engage in a polite game of Taboo, which entails writing answers to some risque questions like Would you have sex with a minor? Would you have sex for money? blah blah blah…

However, all of this happens too early to fool us and it’s all revealed to be a gag at the expense of Jones, the only one not to get a card and has apparently been blackmailing the others. When they seemingly forgive her and move on, Hypocrite flips, takes a shotgun and begins offing the others. Told you it was gonna sting.

With the cheater-weapon in play, Taboo is a very boring stalk n’ shoot with next to no grue and it ends with an entirely dull poison murder-suicide pact thing. But at least they’re all dead.

Buffy alumni Amber Benson is endearing as the ever-wrecked Piper but she truly deserves better exposure than this crap, which fails to impress on any scale, becoming taboo itself for reasons of taste.

Blurb-of-shame: Derek Hamilton was Eddie in Ripper: Letter from Hell. 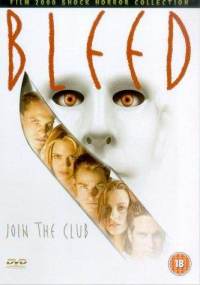 Dire-logue: “You wanna see tits? Well here they are and fuck you!”

Another post-Screamie with all the budget of a shopping trip to Aldi that has lonely new girl in LA Maddy (Rochon) seduced by her boss and then inducted into his snobby circle of friends who fool her into thinking they’re all part of The Murder Club and have each offed a stranger to surf the adrenalin rush.

Poor naive Maddy takes it the wrong way and kills a woman she has a ruckus with. The others regroup and decide what they should do but by then the white-masked psycho who, until now, has been chopping up various extras starts doing away with them in their homes.

Is it Maddy? After all her mom (Brinke in a flashback) and dad chucked her out years earlier? No. It’s someone else.

The trouble with Bleed is that it’s an out and out retread filmed almost entirely in back yards and apartments with dialogue exchanges used to staple the plot holes together; for instance, Maddy goes on one date with her boss and is invited to a party the next day where a group of complete strangers decide to let her in on their “big secret!”

In spite of some production polish and the ever-lovely Rochon, Bleed sucks out more tolerance than claret. 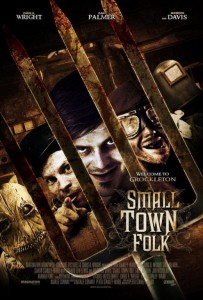 Cheap shows for pre-schoolers often include effects work that looks like a crayon drawing has been scanned into a Mac and then actors are superimposed over the top of it. Fine. Baby Susie isn’t going to get angry with crap production values at her age. But in a horror film…? Just… No.

Had it not taken four years to create and been funded by the cast and crew, this would unquestionably be a native of half-star city.

Unexplained men near the town of Grockleton in the New Forest kidnap women to procreate ‘their kind’ and murder any men who get in the way. Enter a married couple “on an adventure” and some local teens fooling around in the woods and… and… and fuck it, I don’t know what was going on.

As it was originally intended to be a short, there just ain’t enough her to justify history’s longest 87 minutes. There are more than half a dozen killers running around cracking misfired jokes, tormenting Grockles (non-locals) and talking in a bizarre thespian sub-language.

I’d wager 95% of the budget went on securing the three-minute Warwick Davis cameo that bookends the story. Britain’s Got Talent – yeah? Where is it when you need it?

Blurb-of-shame: Dan Palmer was in the marginally more amusing Freak Out. 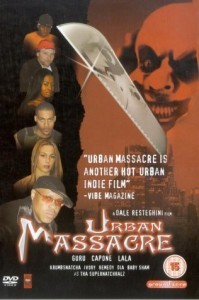 In the 80’s, mucho slasher filmage associated itself with hair metal and, in several examples, featured doomed rock bands pitted against a loon with a blade. So time (sadly) moves on and thus this millennial slasher centres around the fortunes of growing rap quintet The Supernatchrals, who find various members of their entourage are being knocked off by a maniac dressed as a clown – as they always seem to be in urban bodycount pics.

For a shot-on-video feature, Urban Massacre doesn’t look bad but, unless you’re well versed in rap and hip-hop (safe to say I’m not), much of the dialogue – largely consisting of ‘fuck you’, ‘fuck him’, ‘fuck that’ – will be lost on you.

While intermittent rap numbers and “statements” on the companion culture to downright racism are testing, at the end the feisty fivesome (three guys, two gals) literally have the killer pinned down, stop, look at the camera and tell the audience they will not unmask him as we will have to wait for ‘Part Two’.

Given this 11th hour atrocity – especially when the pre-credits practically spelt out the identity and motive – all points gained immediately return to zero. It’s insulting and hypocritical, especially as the characters have spent eighty minutes whining about racial injustice and forcing their shit brand of “music” on us, yet they’ve seen fit to halt the film completely and cut back to another cruddy rap number.

For slasher-but-not-rap fans (me), the chubby white MC in the group occasionally spouts pointless horror movie trivia but everything else is about as memorable – and credible – as Vanilla Ice’s last album.

tagged with after they were famous, calendar carnage, Canuck, get your own ideas!, I want to die, me me me!, Nu-di-ty, rip-off central, Rule Brittania!, slasher, spoilers, star power, the 80s, weird-ass twist, what the hell!?, who finances this crap!?