A sort of themed return to Rubbish Films That Don’t Deserve Long Reviews, with an emphasis on the films that almost tried to warn you in their titles. Maybe it’s simpler to do nothing.

Among the advice in horror films is not to go in the woods, look in the basement, answer the phone, go to sleep but none have yet ‘fessed up and called themselves Don’t Watch This Piece of Shit Movie… 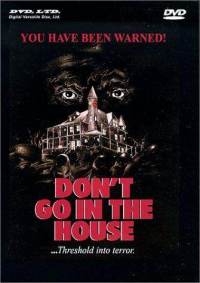 DON’T GO IN THE HOUSE

“You have been warned!”

A completely depressing little attempt at stapling a pyromanical theme to the basic plot of Psycho.

Grimaldi is a quiet labourer who lives in a big gothic house with mom, who tried to ‘burn the evil out’ of him as a child. When she dies, he finally realises he’s free to do whatever he wants and so inexplicably decides to pick up women and burn them alive in a specially converted sheet-metal room in his attic.

Considering it was made before Friday the 13th opened the floodgates for the genre, House shows a progression from the sleazier rape n’ torture flicks of the early 70s towards the stalker formula. Consequently, it has more common ground with The Driller Killer than Halloween.

Still, even at a mere 76 minutes (cut from the original 81), it’s flabbergastingly boring, attempting to direct our sympathies to the killer and his cheater work buddy who ultimately saves the day! Conversely, the female victims are hardly given anything to do and (in this version at least) there’s only one on-camera kill.

The effective Maniac-style finale is good but just too damn little, too damn late. This leaves only a squalid, sexist and homophobic addition to the Don’t mini-movement. No sale. 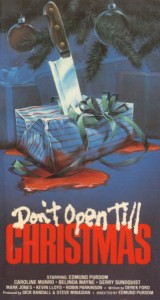 Dire-logue: “I shall look like a gay old queen!”

Street Santa’s, store Santa’s, Christmas Party Santa’s and anybody else unfortunate enough to have donned Saint Nick clobber are themselves being clobbered by a Christmas-hating psycho (possibly from Tower Hamlets?).

Purdom is the Chief Inspector in charge of stopping the mayhem, whilst dealing with the sulky daughter of an early victim and her mullet-headed boyfriend, who visually epitomises everything wrong with British 80s fashion. This mismatched pair goes about trying to solve the mystery on their own, amidst trips to take part in dodgy photo shoot and busk in the middle of a market with nothing but a flute!?

Meanwhile, Santa’s all over the place are being knifed, burnt, glassed and even castrated in the middle of taking a piss. Who’s doing it? There are several palpable suspects in supporting roles and Purdom himself might even be our guy.

Once unmasked, the killer is reminded by sulky girl that he killed her dad, to which he responds by saying: “That was unfortunate – but he reminded me of Christmas time.” He then kills her! (Possibly offended by the flute).

With the nominal heroine out the window, a peepshow employee who witnesses one of the murders in promoted to the role, kidnapped by the killer and then chased about deserted Soho streets in the middle of the day (!) and her ultimate fate is never really explained. There’s a brief flashback scene fisted in to do with a crappy family Christmas in some ill-conceived attempt to make sense of it all.

Though it looks okay on the surface, this is a real mess. Caroline Munro, whose named is emblazoned all over the video box, has a cameo of about three minutes as herself, probably as a favour to Purdom. 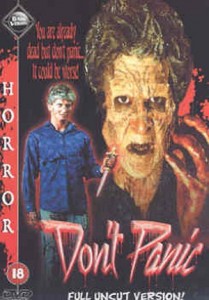 “The REAL nightmare is just beginning.”

If you thought Don’t Open Till Christmas was an acid trip into bizarro WTF territory, why not give this completely demented Mexican combo of Elm Street and The Exorcist a spin?

Dorky teen Michael – who sports a sort of permed mullet hairstyle – and friends play with a Ouija board that gets his friend Tony possessed with an evil spirit named Virgil who then kills the others.

The catch here is that Michael has precognitive Laura Mars-style visions, during which he is blind to everything else, illustrated to us with some tacky plastic contacts that look like they’re hurting the actor.

Beyond the bad writing, acting and production, Michael has got to be one of the most embarrassing lead characters on celluloid. He’s 18 but spends the majority of the film in dinosaur pyjamas and whines like a ten-year-old when he doesn’t get his own way.

In its efforts to ape Freddy, mom is an alcoholic and the killer’s face (when seen) is burnt and disfigured. The video box I had bore the tagline: “Forget Freddie [sic] and Jason, Virgil’s the newest nightmare in town.” 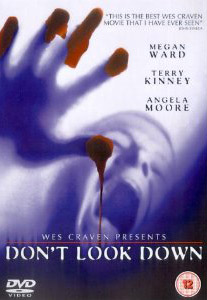 Dire-logue: “OK, so it’s me against the bogeyman.”

A nauseatingly tame made for TV thriller with ‘Wes Craven Presents’ all over the box and “this is the best Wes Craven film I’ve ever seen” written on it. What? Like, seriously? He also lent his name to fucking Wishmaster. And it’s rated 12.

Racked by guilt after she fails to save her little sister from falling over a cliff edge, reporter Ward finds herself increasingly anxious when faced with vertigo-inducing situations and so joins an intense therapy course run by iffy shrink Kinney, who might be the one shoving the patients off rooftops outside working hours.

An impressive opening act that has shades of the Stallone actioner Cliffhanger, a not-entirely predictable exposition from the killer and the fact that the black woman lives are the only distinguishing features in this boring crack at a potentially interesting premise.

The acrophobia angle is played out mainly with psychobabble and boring exercises for the group members, only two of whom are given that fatal push.

This should’ve been better.

Overrall blurbs-of-interest: Dan Grimaldi was in iMurders; Caroline Munro and Kelly Baker were in Slaughter High; Munro was also in Maniac and The Last Horror Film; Edmund Purdom was in Absurd and Pieces. Ruben Galindo also directed the far better Cemetery of Terror and Grave Robbers. Fortunately, that’s all.

tagged with asshole characters, calendar carnage, death on campus, gore o'clock, I want to die, Nu-di-ty, one two Freddy's coming for you..., Rule Brittania!, slasher, star power, the 80s, what the hell!?, who finances this crap!?