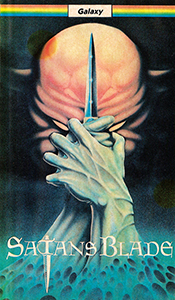 Justin Kerswell of Hysteria Lives! sent me a third-generation VHS copy of this film a long, long time ago (quite plausibly 100 years). In the days before DVD, second, third, fourth gen dupes of films that were very cheaply made in the first place and going from NTSC to PAL format weren’t always a pleasure to watch… Satan’s Blade may have come from Satan himself.

Holidaymakers spending their precious vacation time at a ski resort are informed of a local legend about a giant man, pissed off at the locals forcing him further and further up the mountain blah-centuries ago, and a recent murder at one of the cabins is scaring everyone into believing it all over again.

The first forty minutes is the usual meet-the-meat rubbish, with five girls in one cabin, and two couples next door: Sue’s moaning about her dead father, while walking bouffant Al is constantly hungry, and Stephanie flirts with Tony, whose wife thinks she’s not exciting enough for him. And boy is she right.

Cue shaky POV camera work and the killer offs four of the girls in less than two minutes before going after the happy couples and the final girl (who smokes and kisses married men – gasp!) Once the entire cast has been stabbed, there’s a summary explanation offered up to try and make some sense of it all: Anyone who picks up the titular skanky old knife is turned into a killer blah, blah, blah…

A horrible shrill piano soundtrack drowns out much of the dialogue, and sounds like it was ripped off of Blondie’s Call Me. Post final fade-out, the producers have the nerve to inform us that “The Legend Continues” but there’s no Satan’s Blade II just yet. But it waited 100 years before, look out people of 2083!

tagged with slasher, the 80s, what the hell!?, who finances this crap!?