Dying for the weekend 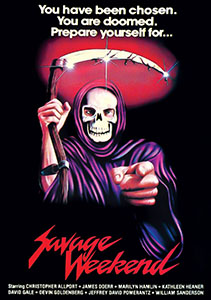 A.k.a. The Killer Behind the Mask; The Upstate Murders

“You have been chosen. You are doomed. Prepare for Savage Weekend.”

Years ago I had a film almanac that I worshipped. It was called the Video Movie Guide 1997 and rated films from five stars to a picture of a turkey. Despite harshness to the slasher genre (what film guide isn’t?) it was usually quite accurate. So my interest was snared by the

it gave to Savage Weekend. Many moons later, I found a copy of this then rare-as-decent-Beyoncé-song movie and… well, the book was eventually tossed out.

An ever-present boom mic should be warning enough to fast forward through most of this chore hailing from 1976: the year that scriptwriting forgot. Although it predates Halloween and makes a lot of use of point-of-view camera work, nothing can serve as recompense for how awful it is.

Five city folks venture into the country for the weekend to watch a boat being built. Exciting times. At the house they’re staying in, a masked killer eliminates them by hatpin, band-saw, and hanging. 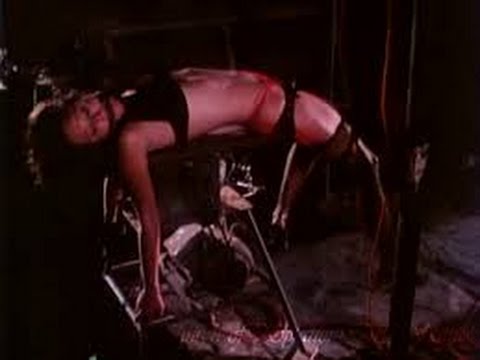 That’s it for plot, and the film throws in a few variable suspects that would – ten years down the line – typify any red herring in a slasher flick: There’s a silent, unhinged custodian, the local rednecks who don’t take kindly to having their asses kicked by the effeminate gay member of the group (who is offensively represented by slinking around with his hand on his hip and sporting make up), and a random character – whose presence is never fully explained – who has the Jones for sexually frustrated nymph heroine Hamlin.

An appalling banjo theme, needless excesses of nudity, and a totally disagreeable cast (except for O’Heaney who would later play the final girl in He Knows You’re Alone), it’s no wonder this was shelved until 1980 by which time writer / director Paulsen had unleashed the nearly-as-wearisome Schizoid.

Blurbs-of-interest: Christopher Allport was in both Jack Frost movies.

tagged with before they were famous, Nu-di-ty, slasher, who finances this crap!?