Don’t go near The Black Trees! 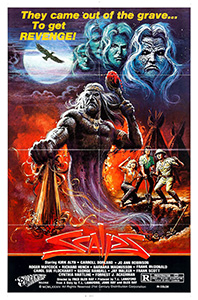 “They came out of the grave… To get REVENGE!”

Laughter Lines: “Defiling the graves of the dead will only anger their souls!”

Shot for a measly $15,000, possibly surfing the Native American horror trailblazed by Poltergeist, this early Fred Olen Ray flick was re-tooled by the studio and edited into a bit of a nonsensical mess, which frankly drags along at a snail’s pace before the horror begins.

Six students go ahead of their professor to an archeological dig. Actually, I think it was four students and two bitchy, vacuous girlfriends. They’re warned by an ageing Native American man they encounter at a gas station against digging around The Black Trees, a burial area that’s sacred and dangerous to outsiders. But, being a bunch of entitled white folks, they say fuck it and dig there anyway. 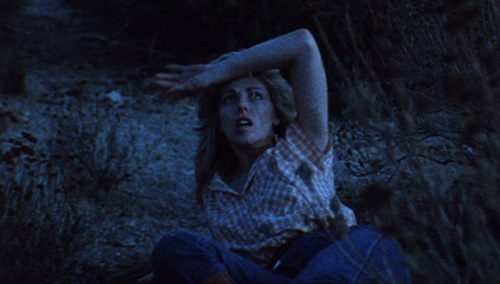 The spirit of Black Crow is soon unleashed and one of the group possessed so that he slowly morphs into a Native American monster (or wears a cheapo rubber mask) and goes after the others: Scalping (only one), bashing the brains out of, and shooting arrows into, while goo-girl DJ squeals that they’ve disturbed forces they shouldn’t have.

Scalps is a bad movie by any standard. Shot via several different cameras that give it a choppy look, with day-for-night scenes and a really fuzzy night-for-night scene that lend to it the feel of a snuff movie (the fact that many of the actors never did another film also giving a kind of credence to that), but really it’s just the cheapness of it all. 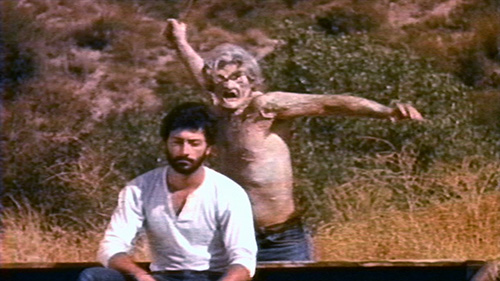 However, as Ray comments on the DVD interview, there is something about Scalps that’s unsettling, an uncomfortable factor that makes it… not scary per se, just creepy, which is something of an unintentional byproduct of the low-end production values, most notable during the truck murder and the slightly too real rape. The gore FX is also quite well done, a decapitation that harks back to Mrs Voorhees’ grim end and the solitary scalping is pretty gross.

Things end with the promise of Scalps II, which never came to be. Possibly a good thing. The Ghost Dance did it all better.

tagged with after they were famous, gore o'clock, Nu-di-ty, the 80s