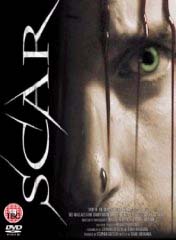 “It was just bad timing.”

Poor Dee Wallace… Stuck in a film with a tagline that sounds like an excuse for it being so terminally boring. Scar is a film in which so little happens that the DVD came with some toothpicks to prop my eyelids open.

Thespially-challenged teenager Tom returns to a small wooded town along with his best friend Jenny to try and work out what happened to his best friend (Jenny’s BF) one year earlier during a doomed hike in the surrounding forest. In the prologue, we see said friend attempt to seduce and then rape a nubile teenage girl at a remote cabin and then get the axe from her enraged mother. It soon transpires that the girl and her mom died a decade earlier…

Dee played a local psychic who gets dragged into proceedings when the dumb teen heroes figure out the paranormal slant, but even she cannot save this shoddy tale, which crumbles like a sand castle that manages to catch fire as it goes… There’s an evident influence from Asian girl-ghost flicks (The Grudge comes to mind) but Bhorania isn’t an agile enough director to make these homages count towards anything and they sink into the burning sand like petrified feces, resulting in a mound of crumbly, sandy crap that’s on fire.

There’s a vaguely eyebrow-raising moment at the last second, which I’ve now completely forgotten about, but I made a note that it occurred so I assume it’s still there. Wade on through, if you must.

Blurbs-of-interest: Dee was also in Dead End Road, Halloween, Popcorn, and Red Christmas; Joe Estevez was in (the even worse) The Catcher and also Sigma Die! and Axe Giant.

tagged with after they were famous, slasher, what the hell!?, who finances this crap!?