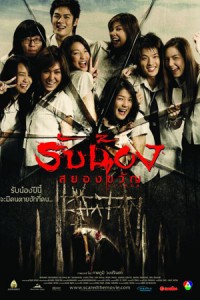 Detailing the plot of this grisly Thai dead-teenager flick could prove problematic, ’cause the DVD has no English subtitles, despite the film itself coming with English translations of the credits.

A large group of freshmen students set off on a hazing trip, which runs into entry problems and they foolishly follow the advice of a local vagrant who knows of a bridge they can cross to their destination. About half the kids decide to give it a go and end up stranded when the rickety old bridge collapses, taking their bus, the driver, and several of their friends to the bottom of the river… 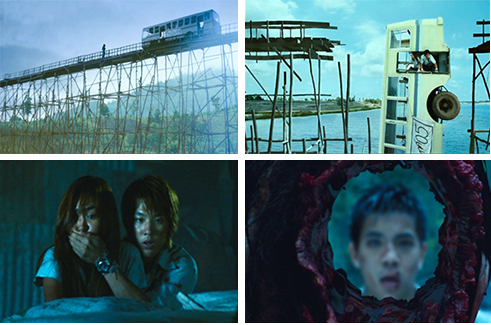 Clambering ashore and splitting into two groups after some kind of disagreement amongst themselves, three boys quickly fall into a variety of lethal traps that skewer and impale them. The other, larger group (mostly girls) finds a deserted old town, but also cross paths with a brutal killer, who uses car windows, exhaust fumes, and regular garden tools to do them in – nearly every slaying here is bloody.

Thailand has taken a few ‘stabs’ at creating gory slashfests before, ranging from the entertaining but cheap 999-9999, to the predictable and dull Crying Tree. Scared is probably their best effort yet, fusing ideas lifted from the Final Destination films (the bridge collapse is well choreographed, with a nasty pole-through-the-face for the unlucky bus driver), old school kids-in-the-woods slashers, and ending in a cruel twist that’s reminiscent of Battle Royale. 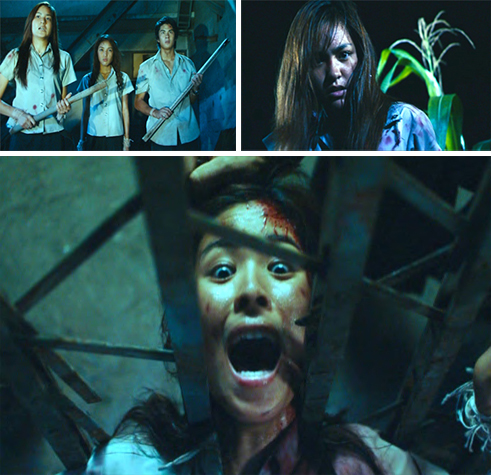 There are some memorable gore-drenched moments, especially when the shyer kids fight back: A girl goes for a maniac with a corn-saw, clearly having seen enough violence for one day.

The lack of subtitles and linguistic differences mean that characters become indistinguishable when we don’t really know their names in the first place, though there are some genuinely sad moments as kids finding their dead friends and weep for them, but with a plot this simple, you’ll be having such a good time you won’t even notice!

tagged with Asia, get your own ideas!, gore o'clock, slasher, weird-ass twist