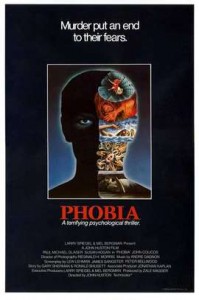 “What happens when your psychiatrist goes out of his mind?”

Thaasophobia is the fear of boredom.

Atychiphobia is the fear of failure.

If you can buy the concept that John Huston – JOHN HUSTON!!! – directed this miserably disappointing Canadian flick that barely got released, then you can buy freakin’ Starsky as a shrink who experiments on a group of ex-cons with varying phobias – two of whom would make up members of the Crawford Top Ten in Happy Birthday to Me the following year.

When the agoraphobic member of the programme is blown up in the doc’s apartment, suspicion falls on her fellow patients that one of them was intending to kill him instead.

Predictably, the other members of the group start dying in increasingly suspect ways, of course relating to their respective fears: One is drowned, another squashed by an elevator, and a third bitten by a snake.

Solving the mystery isn’t hard (‘specially thanks to the tagline), with the most ‘likely’ perps out of the way, there aren’t many other avenues to explore and the climax fizzles out with a boring revelation and a motive, which will leave the audience needing more therapy than any of the patients ever did.

Attempts to make the characters slightly more dimensional than contemporary horror films of the time are never followed through, resulting in a bunch of people we don’t really understand, much less care about. Phobia is one of those above-its-station efforts that thinks its not a slasher film and so contains less blood than your average pebble.

Quite deservedly, it tanked at the movies – even in the big horror year of 1980 – teaching Huston to steer clear for a while.

For a better example of the hoards of “ironic” death-by-phobia films, try Boogeyman 2. That one, at least, knew what it was and had a bit of grue.

Blurbs-of-interest: Langlois and Eisner were two of the teens who DON’T die in Happy Birthday to Me; Marian Waldman was Mrs Mac in the original Black Christmas.

tagged with after they were famous, Canuck, slasher, star power, the 80s, weird-ass twist, yo! Hollywood