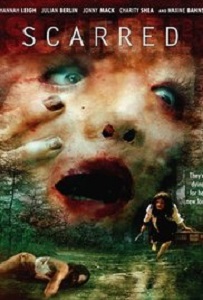 “They’re dying for her new look.”

Laughter Lines: “We have a better chance if we split up.”

The declaration that “there’s a story about these woods…” sets into motion a series of events that dooms a family camping trip into the wilderness.

According to the park ranger who utters the line – and corresponding flashbacks – a backwoods hick who beat his wife regularly, caught her with a deformed trapper and, after knifing him, became enraged when wifey announced she was pregnant and later gave birth to a girl with the same skin condition. Years of barely suppressed rage later, he cut off the child’s face before burning down his house. Now, twenty years later, the child prowls the forest slicing the faces off pretty girls to mask her own.

Although Scarred explores no new territory, the first two thirds of the film are well enough aced by a game cast and the internal troubles of their secular family unit – they’re being forced to bond with dad’s new trophy wife – are explored thoughtfully.

When the feral killer turns up, things unfold in a slightly different manner than usual, with the freshly de-faced victims still alive and wandering deliriously around the forest. The third act sees formerly bitchy daughter Kim take the reigns of heroine and eventually save the day, albeit via a laughable confrontation with the killer, which goes down the Amy Steel route of posing as Mom to fool the nutter. 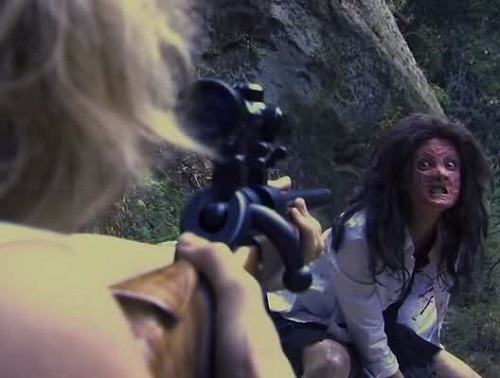 T&A is off the menu and many of the killings occur off screen, although the scene where we witness just how a face is ripped off a shrieking victim is pretty intense. Ultimately another rent-a-psycho-with-a-particular-penchant video film, but ignore the (unintentional?) comedy and it’s a very watchable one at any rate.

Blurbs-of-interest: David Austin and Charity Shea were also in The Pumpkin Karver.

tagged with gore o'clock, slasher, slasher films that aren't supposed to be funny but are funny