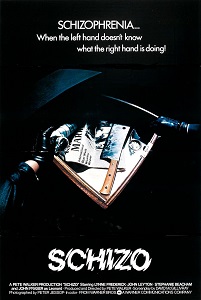 “When the left had doesn’t know what the right hand is doing.”

The late Lynne Frederick (last wife of Peter Sellers) is professional skater Samantha, whose marriage gains enough column inches to attract the attention of silent-psycho Watson, who takes a big knife and catches the first train into London ,where he commences a campaign of creepy phone calls and day-to-day stalkage, sending the woman into despair.

But… is he the black gloved maniac who starts killing her nearest and dearest? Long term collaborator McGillivray parted ways with Walker after this film, feeling that the attempts to railroad the viewer down an alley of assumption made the fiend’s actual identity too obvious. However, compared to the avalanche of mystery-slashers that would arrive in the 1980s, Schizo is quite competent in keeping the face of the killer quite uncertain until it chooses to reveal them.

Frederick appears to struggle with some of the material, especially in the presence of the ever-fabulous Stephanie Beacham, consigned to the loyal best friend role again, who turns detective on Samantha’s behalf. There are some good murders peppered throughout: A knitting needle through the head and out of the eye, and a man skewered by machinery he falls on to. Alas, a good minute or more was scissored by the BBFC and wasn’t restored on the cut I saw.

Subtler than Walker’s previous films, Schizo serves as an interesting example of the slow gathering of elements that would be cemented by Carpenter and Cunningham shortly after, even if it’s a slightly crass Hitchcock imitation in isolation, and a reminder of how vile British wallpaper patterns were in the 1970s.

Blurb-of-interest: Jack Watson was also in Tower of Evil.

tagged with get your own ideas!, Rule Brittania!, slasher, star power