Get all the big names you want – it still sucks 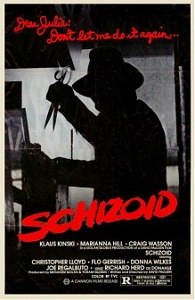 A.k.a. Murder By Mail

Laughter Lines: “He doesn’t want to hurt me, he just wants my help.”

Despite some heavyweight names attached, Schizoid is mostly a nonsensical bore with a scissor-wielding killer offing the female members of Kinski’s therapy group – all to the tune of a crappy synth score. Why? Well, the motive is never really explained and by the time you find out who the killer is – if you haven’t already guessed from all the stupid plotting – you won’t care anyway.

Hill is a columnist receiving cut-and-paste letters from a psycho wants to kill her, while she’s screwing Kinski, who in turn is trying to build bridges with his snotty daughter. It relies on so many coincidences it’s unreal, and why the killer only targets the women is never resolved, just an excuse for the producers to get their femme cast members to bare some skin and then get cut up.

The usual bunch of red herrings are lobbed into the mixing bowl to throw the viewer off the scent, but they’re too transparent to consider, like Christopher Lloyd’s pervy repair man. In a turn of huge convenience, all of the suspects happen to be gathered at Hill’s press office for a climax that already sent you a letter six weeks ago telling you it was coming. If anything, it does reverse some of the damage done by Paulsen’s previous effort, Savage Weekend.