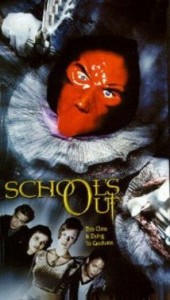 “This class is dying to graduate.”

The native title of this German made-for-TV stalker flick translates as Scream! For I Will Kill You!, which clues us in on where many of its ideas came from.

At their high school graduation party, a quintet of teen friends concoct some spider-themed pranks for their teachers as a sort of final goodbye treat for themselves. Nina and Tom are having relationship troubles; Anne is worried she may have contracted AIDS, and Philip and Eva just want to party! But what happened to Jessica? Why didn’t she ever turn up? Could it have something to do with the escape of a psychopathic killer from an institution eleven years after he stabbed several women with a huge pair of scissors… Scissors very similar to the pair Eva bought along with her to aid the group’s prank setup?

Before long, the kids are being stalked and skewered by a masked maniac in a harlequin costume, replete with requisite snippers. The first hour of this slickly pieced-together number is involving and nostalgic for early 80s campus slashers. However, once good-girl Nina is safe and sound in the arms of her detective uncle, the wheels begin to work loose as she and fellow survivor Philip try to suss out what really happened, a curiosity which takes them back to school and forces them into a deadly confrontation. 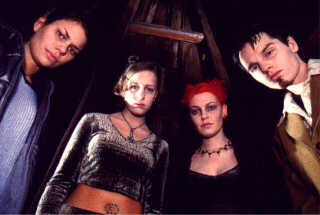 While its TV origins may be responsible for the tame quotient of grue, School’s Out is still better than many American features that have gotten wider international exposure, making it a worth a look for genre masochists.

Followed by a sequel: Dead Island: School’s Out 2.

tagged with 90s horror month, death on campus, Euro-horror, get your own ideas!, Scream, slasher, TV