Scott Pilgrim vs Cinderhella and the Class of ’92 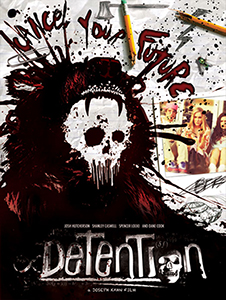 Dire-logue: “It’s so obviously a conspiracy to get everyone to think I’m a total loser making pre-emptive mid-90s pop references.”

Oil and water. Sandals and socks. One Direction and a record deal. Some things just don’t work together. To that we can now add Scott Pilgrim-esque motion comic platitudes with a Scream meta slasher semi going on. Detention is weird.

What there is of a story begins with the murder of high school superbitch Taylor, who commentates to camera about, like, life n’ stuff, the many cliches of the Mean Girls generation with an OD of toxic wit before getting her throat slashed, then stabbed and tossed out the window. Seems one can, like, totally still scream in spite of a cut throat.

Grizzly Lake High loser Riley is soon attacked by the same killer, dressed as fictional slasher flick killer Cinderhella. Another murder follows and eight characters are given Saturday detention (sadly not in Shermer, Illinois). Riley and crush Clapton (Hutcherson, pre-Hunger Games), use a time machine inside the school’s Grizzly bear mascot, to go back to 1992 to stop the end of the world.

Effectively, the detention itself is irrelevant, beginning almost an hour through the film and meaning nothing in the grand scheme of things. Here, where we expect the nine teenagers to start getting whacked, the film branches off down its stupid time travel route. The slasher plot is lost in a loads of gags about body swapping, 90s fashion, music, and is brought back at the end to wrap things up, revealing the killer to be just who the arrows were pointing to and not bothering to offer a motive. Not a clear one anyway. 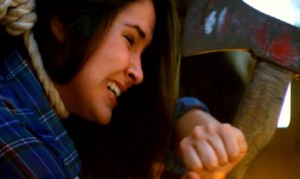 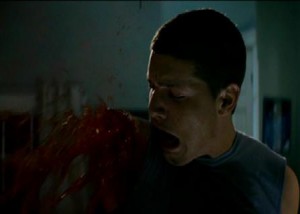 While the dialogue is axe-blade sharp, the insights into 90s culture (also curiously unexplained) are amusing (“Oasis were the best Beatles cover band”), it just doesn’t go anywhere. The time travel element appears from nowhere and for no discernible reason other than to serve as a basis for more 1992-woz-funny jokes.

Had this a fraction of the amount of Scream‘s attention to detail, it would’ve been approximately 64% better, but it’s like someone wrote a load of funny jokes about shit and decided a half-assed slasher opus would be a viable genre to staple them to, but nobody seemed to give a shit about making the slasher part of it any good… People die and then un-die, and much of the body count is made up of film-within-a-film (and sometimes within-a-film-within-a-film-within-a-film) slayings – only five people are offed in the narrative.

Extra points for featuring two men kissing (gasp!) and NOT punishing them for it for a change, and Parker Bagley’s appropriate eye-candiness. Growl. 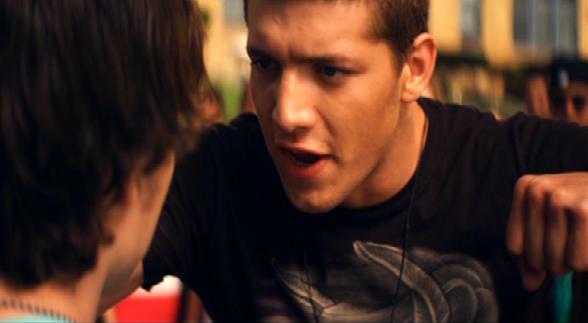 The two-and-a-half-stars are 80% for the clever-dick script, which will date faster than, like, an X Factor winner’s single. Watch Detention again in ten years and see how much of it makes any sense. Or is remotely funny. See, unlike the of-the-moment gags, the killer-with-a-knife plot has remained the same for 30+ years, and that’s the part that should’ve been the focus of the exercise.

tagged with before they were famous, Canuck, death on campus, gay stuff, Nu-di-ty, Scream, slasher