As Vegan Voorhees winds down to its inevitable end, excluding anything incoming, there are only 39 titles left on my list to review, so in between the various responsibilities of life that close in like the walls of a trap from Saw MCMXVII, I found an opportunity to knock a few on the head that I don’t have a whole lot to say about… 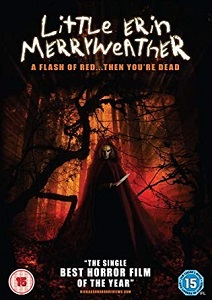 “A flash of red… then thump you’re dead.”

At first glance, Little Erin Merryweather sounds like a few hundred other slasher films: A killer with a thing about Little Red Riding Hood is gutting students around a college campus. But wait… this time all of the victims are boys and the killer is an unhinged female. Even the stock virginal final girl has been switcheroo’d to a guy. While role-reversals have been tried several times in horror, here the angle is relatively played down by the staging. A trio of college boys form a little Scooby gang with their psych professor when the murders begin to cut closer to home.

Meanwhile, shy, dorky Peter develops a crush on library worker, Erin, who has a penchant for laying frat boys to waste and replacing their intestines with rocks, as per the original fairytale. Why she does this is never that clear, but there’s some backstory around child abuse that causes Erin to view boys as wolves.

Director and scribbler Morwick (who also plays Peter) has created his film delicately enough to ensure there’s a realistic edge to the players without forgetting the goosebump contingent, which is realised perfectly in the final library scene, which practically redefines the concept of tension.

Why only three stars? Well, it’s a little too short, a little tame, and, despite its comparable youth, looks like it could’ve been shot in the first half of the 90s. Trivial grumbles aside, this is one for those who enjoyed Malevolence (ironically also featuring actor Brandon Johnson) and aren’t bothered by a lack of grue. 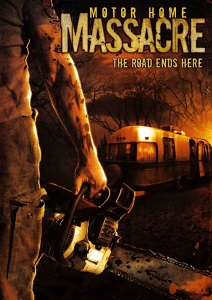 Laughter Lines: “Last time this thing was on the road, Michael Jackson was cool.”

Seven teens embark on a doomed camping trip in this strange comic-slasher, which is about as clunky as the gears on a Winnebago. Sabrina wants to get over a break-up; sleazy Roger wants to help her achieve that; dorky Benji wants a girlfriend, and the other two couples just want sex, sex, and more sex.

After the requisite double murder that opens the film (and is shown again later when the kids are given the requisite warning about Black Creek Park by the requisite store clerk), it takes nearly an hour before they even reach the campsite, befriend a girl who is also trying to escape a bad break-up, and play crappy pranks on one another.

The slaughter eventually gets underway to decidedly underwhelming effect, while the acting gradually slides down an already slippery slope once the killer is unmasked. One amusing scene where Sabrina and Benji attempt to untie themselves is not enough to save this one, which is about as agitating as a trip in an RV with six annoying people. 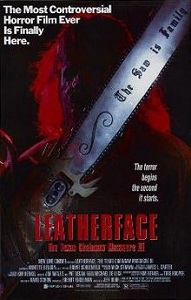 “There’s roadkill all over Texas.”

I’ve never been much of a fan of the Texas Chainsaw franchise, a perspective reiterated by this shoddy third entry, which was much toyed with in the editing suite, resulting in a scrappy, hard to follow story, that pairs it ‘nicely’ with Kim Henkel’s ‘true sequel’, The Next Generation - which is even more punishing.

California teens Hodge and Butler are driving across Texas to Florida when they stop at the wrong garage and are tricked into taking a route that passes by the home of Leatherface and his new clan, including future Lord of the Rings fixture Mortensen as a slick psycho. The unfortunate youngsters end up getting into a car accident with Ken Foree’s survivalist and are chased through the woods for a while before California Boy is killed and California Girl is taken prisoner back at the ranch, until she escapes for revenge blah blah blah.

The first half of the pic is fine, with a nice set up and great camerawork, but once our chainsaw-toting anti-hero enters the frame, things begin to fall apart with sloppy edits and evident gore cuts, leaving the fates of several characters entirely ambiguous, although there’s some interesting harking back to the original, with Toni Hudson’s increasingly primal last survivor of a previous group who passed by providing an interesting, though too-short distraction.

Watch for the scene where Leatherface goes up against a Speak n’ Spell and loses several times over. 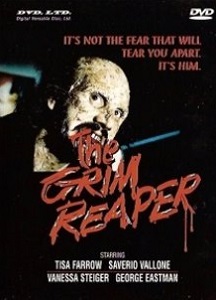 “It’s not the fear that tears you apart. It’s him.”

Tisa Farrow – Mia’s sister – is an au pair to an English family vacationing on a remote Greek island. She hitches a ride to shore on a yacht chartered by a group of yuppies only to find the entire place is deserted, thanks to a cannibalistic psycho. Only one mystery woman and the blind daughter of Tisa’s employers are left alive.

A confusing vehicle to say the least, undecided whether it wants to connect itself to the hordes of 70s cannibal exploitation movies, or Halloween, kind of acting as a double agent between the two genres, which is a minor point of interest.

The killer is also able to slaughter swimmers from underwater in an opening act that looks like a cheap regional Jaws rip-off. He chews out the throats of other victims, even chomping on the fetus of one pregnant woman in a scene cut from several prints.

Despite the implied gore, the film is lit so poorly it’s impossible to tell what’s going on for most of it and the rushed, inconsequential climactic chase scene only houses a couple of novelty shocks, but doesn’t do enough to sideline the boring nature of it all. Absurd is the sort-of sequel, for which Eastman returned, and is much better. 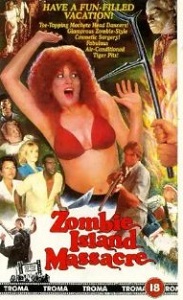 Fans of zombie movies have cited this as a waste of time on several occasions, thanks to its misleading… well, everything. The only zombie is a questionable one seen during a voodoo cultural show put on for a group of American tourists on a Caribbean island. After finding their bus immobilised, they hike to a local house, but there’s a leaf-disguised (!) killer knocking them off one by one.

So the title is a cheat and the production qualities are lousy, but this cheapo flick was still shot on location and, at the end, presents us with a plot twist not commonly seen, involving drug money and undercover investigations – though it has little to do with the murder spree, which are largely off-screen or tame, save for an impressively executed decapitation.

Former Washington-wife Jenrette is the chest-blessed heroine, something the film capitlises on as it opens with an overlong exploration of her in the shower. Most of her supporting cast are largely undeveloped couples on vacation, only there to bite the bullet at some point. A fair effort for completists, but don’t go out of your way to find it.

Blurb-of-interest: Harry Manfredini contributed the score, which is little more than a rehash of his Friday the 13th signature sounds.

tagged with before they were famous, death on campus, Euro-horror, gore o'clock, Nu-di-ty, sequel city, slasher, the 80s, who finances this crap!?