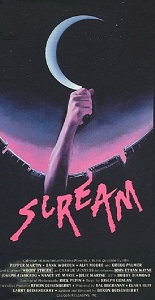 “No one ever returns from this phantom town of TERROR!”

Laughter Lines: “He wouldn’t have enough sense to shit if his mother didn’t call him every day and remind him.”

“No one ever returns,” the tagline promises – uh… yes they do. Half of the cast, in fact.

Ten rafters and their guides find themselves trapped for a couple of nights in an abandoned town that resembles a low-end theme park attraction. Ten minutes in, they’re already wandering around aimlessly in the dark and being killed by an off-camera presence that is never revealed. An hour and several corpses later, some fog rolls in, followed by a guy on a horse and his dog; he tells them he used to be a sailor and then leaves again!

One of the few… ‘defining’ (?) aspects of Scream is that the cast are adults rather than teenagers and all of the victims are male. The age makes no difference though, in fact seemingly making them less intelligent, as they fail to notice missing people and walk off on their own for reasons such as fetching a beer from a separate building. “I’ll be fine!” One character is attacked by a reanimated corpse BUT DOESN’T TELL ANYONE ABOUT IT!

Stir in the crappy daytime-TV saxophone score, horrible characters, dismal acting from some semi-known (John Wayne’s son is in this) and you have one of the worst films in the history of moving pictures. Critics who mauled Friday the 13th should rent this.

Blurb-of-shame: Pepper Martin was later in the only marginally better Return to Horror High.

tagged with after they were famous, get your own ideas!, I want to die, slasher, star power, the 80s, weird-ass twist, what the hell!?, who finances this crap!?