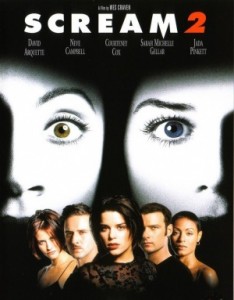 “Someone has taken their love of sequels too far.”

Dire-logue: “Is that the best you can do? ‘Cos Billy and Stu were much more original.”

With slight improvement on the original, Scream 2 is my favourite in the series …so far. Who knows what the fourth movie will have in store? Well, we all will this time next month.

A year or maybe two after the events of the first movie, a trashy slasher flick, Stab, based on Gale Weathers’ book, The Woodsboro Murders, sees its opening weekend thwarted by the gruesome double murder of a couple in the cinema. The scene brings back memories of the prologue from He Knows You’re Alone but is ultimately ruined by the frankly hilarious death-face of Jada Pinkett who manages to make her character one of the most annoying in little more than a few minutes on screen. 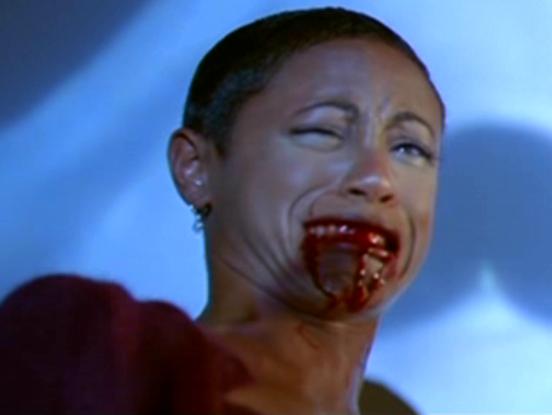 Turns out that the dead kids went to the same college as Sidney Prescott and also film geek extraordinaire Randy, who find moving on with their lives difficult with all the attention garnered by the book, the movie and now the murders, which sucks in Gale Weathers, Deputy Dewey and also Cotton Weary, he who served time for the murder of Sid’s mom before it was revealed he was innocent. And now he wants compensating.

It becomes apparent that the killer – or killers - is keen on picking up where Billy and Stu left off, taking out college kids, eventually cutting closer to Sidney. But who? And why? And who?

Scream 2 was released at the very peak of the genre resurgence, quick on the heels of its predecessor to keep the various other high-budget slasher flicks trailing behind, rapidly building a name for itself by upping the ante rather than merely replicating the formula. 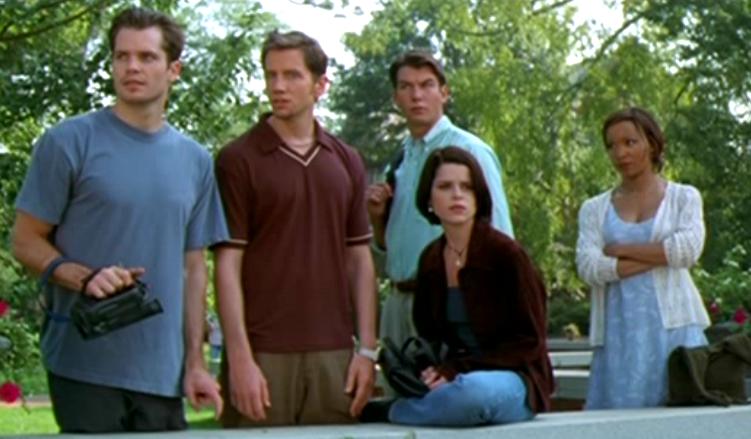 The schtick they pedal this time is all to do with sequels, follow-ups and such, from Randy’s explanation of how horror sequels work (during which he drops a subtle hint at who the killer actually is before we even know), to Sidney’s drama production of Cassandra of Troy - Troy of course being famously built of the remains of the destroyed city just as a sequel is built on the foundations of the previous film.

Craven and Williamson flourish here, both in content and presentation, giving Scream 2 the same sort of zenith as Final Destination 2 and Friday the 13th Part 2. Not to say those films are necessarily the best of their respective series’ but they both represent their franchises finding their beat, although very few film series’ manage to retain the quality of their better output. In the case of Scream 2, everything is on point, almost perfectly pieced together in a big slasher flick jigsaw of numerous suspects, red herrings, heroes and villains; the body count is liberal without going ballistic and it’s sufficiently grisly and occasionally scary.

Great scenes that play about with bits from the first film include select moments from Stab - which Craven himself said was supposed to represent how a hack director would’ve approached Scream - the best part doubtlessly being when, after Sidney quipped to Tatum and Dewey that a film of her life would end up with Tori Spelling cast as her, who else should turn up in the role but Tori Spelling? Excellent.

Clocking in at five minutes short of the two hour mark (almost unheard of in these parts), there’s lots of time for various sequences to be slowly drawn out, like Gale’s cat and mouse chase through a studio, that massively tense escape from the totalled cop car and, of course, the unmasking ceremony, when Sidney faces up to what the killer, or ers, have in store for her as a motive this time.

The finale is good n’ strong. The revelation concerning the murderers was a wonderful homage to a very influential slasher film of olde and while I smugly guessed one part of the outcome, another part had me going “oh yeah! Duh!” Sidney puts up a good fight, using the props of the Cassandra stage we saw earlier to fight back and is eventually caught up in a bizarre stand-off between unlikely characters.

Of course, lots that happens can be boiled down to huge creative license: how people end up in particular places at just the right time is something that we get used to in any horror film but here it’s not so much that characters make stupid mistakes like splitting up to search for someone or going to find out what that scraping noise outside is, they’re jockeyed into position by the killer and are played, some of them throughout the entire film, by the sociopath. 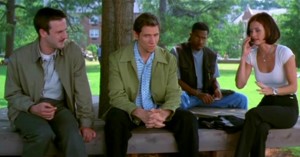 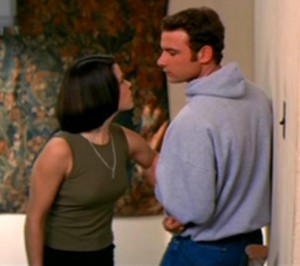 As before, cameos come thick n’ fast from Buffy herself, Sarah Michelle Gellar, in an almost throwaway part as ‘the sorority victim’ – it was difficult not expecting her to whip out a pointy stick and kick ass; Joshua Jackson is in the film class scene and not-then-famous Portia De Rossi and Rebecca Gayheart (the latter turning up in the following year’s Urban Legend) are a couple of dizzy sorority chicks – or are they?

Ultimately marred by the fact that you can’t really see it without knowing the first film, there’s little else to criticize: defenders of the old school had already prepared flimsy arguments against big-budget horror ‘bastardizing’ the legacy of a gazillion skid row projects from fifteen years ago but the fact is that if there was no Scream and Scream 2, slasher films would’ve simply faded away altogether, save for the odd shot-on-camcorder shelf filler and for that they should be lauded rather than lamented. 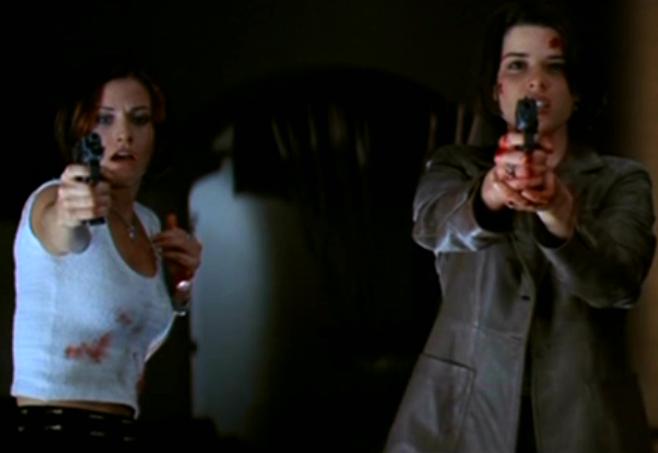 Blurbs-of-interest: Sarah Michelle Gellar was Helen in I Know What You Did Last Summer; Lewis Arquette was also in The Horror Show; Christopher Doyle was in the Toolbox Murders remake; Rebecca Gayheart was also in Santa’s Slay and had a cameo in Urban Legends: Final Cut; Heather Graham was in From Hell; Elise Neal was in Holla; Omar Epps was the lead in Trick; Joshua Jackson was in Urban Legend.