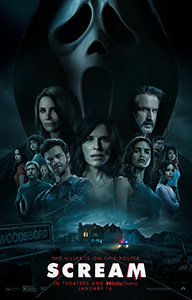 “It’s always someone you know.”

Laughter Lines: “You want me to help you and the host of a morning show to commit murder?”

“Why isn’t it called Scream 5!?!?” people hollered. Well, watch it and this year’s Randy sub – his niece – will explain exactly why. Did you really want a film named 5cream? Some spoilers follow.

OK, I’ll cover a bit of it: It’s like Halloween (2018) being both a sequel and a reboot – a ‘requel’ as the character, Mindy, puts it during a scene where Woodsboro’s endangered teen-populace discusses the Stab movies, now up to their eighth instalment with a film simply titled Stab.

As ever, it wouldn’t be a Scream movie without the obligatory opening kill, and we meet a teenage girl alone in her cutesy home, making some food, texting a gal-pal, when the phone insistently rings. It’s ‘Charlie’ from her mom’s ‘group’, who’s chit-chatty and slowly steers the subject on to scary movies. The Babadook is her answer when asked what her favourite is, and there’s an amusing disagreement over ‘elevated horror’. It’s not long before he has her playing a game and then she’s attacked by Ghostface, who slices and dices, slashing towards the camera as the title thunders on to the screen. 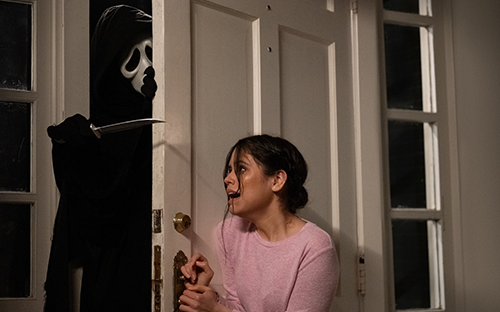 Here’s where Scream 2022 fucks with us. She isn’t dead. The girl – Tara – is recovering in hospital when her estranged big sister, Sam, returns for the first time in some years, her dorky boyfriend, Richie, in tow. Sam has a difficult past, at odds with Sheriff Judy over past troubles, and when she sees a vision of Billy Loomis in a mirror, it’s a big “huh!?” accompanied by a call about her “family secret,” which we’ve pretty much got figured given her age and so the film wastes little time in clueing us in that Sam found out her real daddy was Billy, became a tearaway, and bailed as soon as she hit 18.

When someone is murdered for realz (a “woah!-is-that-really” Kyle Gallner), Sam and Richie visit Dewey for help, who was force-retired, separated from Gale, and living in a trailer. Reluctantly, he joins them in gathering Tara’s friends, as he’s been through enough of these to know the killer will be among them. At the home of Randy’s sister, Martha (Heather Matarazzo joyfully returns for a cameo), Mindy addresses the requel details around legacy characters passing the torch to the next generation, setting up nicely for Gale and Sidney to re-enter the fray, and also explaining why only the events of the original seem to matter (Roman who?). 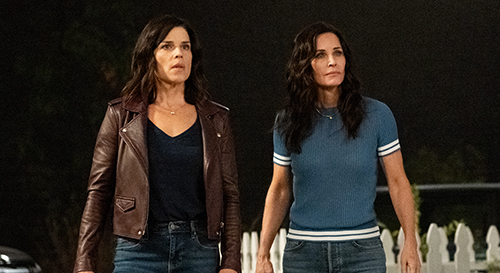 Given that Courteney Cox had asked to be killed off in Scream 4, you should be worried about the fates of our mainstay trio far more than ever before – Scream ’22 doesn’t shy away from its brutality and it’s genuinely sad to have to say goodbye during a tense showdown in a deserted hospital ward halfway through.

Sam and Richie strive to get Tara out of Woodsboro, but end up waylaid and having to stop at the home of Tara’s BFF Amber, where the obligatory adultless teen party is raging. Despite their knowledge of conventions, characters continue to find reasons to venture off alone until all the main players remain and it’s revealed that Amber’s house is where Stu used to live! 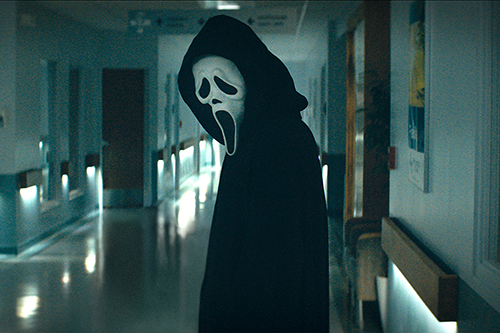 The finale playing out back where things began is a real moment. The zoom out that reveals Sam in the doorway that Dewey staggered out of 25 years earlier with a knife in his back genuinely gave me the chills. It also allows for a revisit to Randy’s “turn around” moment on the couch, being watched in Stab by Mindy, saying the same thing in a fun infinity mirror moment. More interestingly, when Gale and Sidney turn up, they’re so aware of the conventions and deceptions it makes for some excellent dark humour and some great fights between good and evil.

Most fans were weary of a continuation without Wes Craven, and the direction and aesthetic favoured by directors Gillett and Bettinelli-Olpin is certainly not a pale imitation; there’s a reduction in gloss, less colour, which gives the film an edge of feeling more dangerous, like it means business where the previous couple of instalments were softer and lightly sugarcoated. Where they’ve had to adhere to Scream lore, they rearrange the cups, hiding the prize in a different place. 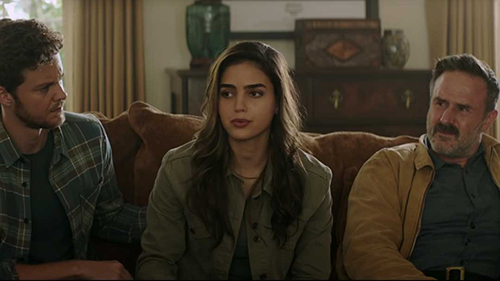 What flaws there are are minor at best: There’s not really a high-concept kill scenario that lives up to the inventiveness Drew Barrymore scene, or Sarah Michelle Gellar’s torment in Scream 2, compensated for with harsher, nastier grue instead. The new characters seem slightly less fleshed out, but this is also addressed when Richie addresses them en masse from Gen Y to Gen Z, and the identity of one of the killers seemed quite evident given how little the actor had to do up until that point.

Things are left wide open for further sequels, with enough characters left standing to do it all over again, probably without the need for Campbell and Cox’s characters to be dragged out of retirement once again. It seems like the passing of the baton that Scream 4 flirted with carrying out has actually worked this time. 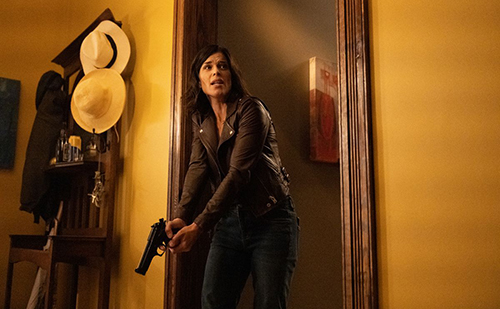 And for those who were hoping for a Kirby Reed return – look closely at the YouTube videos shown on screen when Richie is watching the review of Stab 8.

Blurbs-of-interest: Courteney Cox had a small cameo in The Tripper, directed by David Arquette; Jack Quaid was in Tragedy Girls; Marley Shelton was in Valentine; Kyle Gallner was in the Nightmare on Elm Street remake.